Sudha Murty is a favorite author among young children and adults. She is an engineer, author (in both languages, Kannada and English) and social worker and has won numerous such as Padma Shri. She is the chairperson of the Infosys Foundation and a member of the public health care initiatives of the Gates Foundation. She also established the Murty Classical Library of India at Harvard University.

Appreciation and accolades have always come naturally to Sudha Murty- in school and college she topped the class with honors. She also has the distinction of being the first female engineer at TELCO. Murty has done a world of work through her foundation with her focus on education, female empowerment, hygiene and poverty alleviation.

She is an exuberant mentor with a million stories to tell. Her enthusiasm is infectious and her compassion for the downtrodden and love for children shines in her writing.

V. S. Naipaul was born on this day in 1932. He put Trinidad and Tobago on the map with the literature he churned out- thirty books in half a century. He won several awards including the Booker Prize, the Jerusalem Prize, the Trinity Cross and the Nobel Prize in Literature.

He was awarded the Nobel “for having united perceptive narrative and incorruptible scrutiny in works that compel us to see the presence of suppressed histories.”

“Naipaul is a modern philosopher carrying on the tradition that started originally with Lettres persanes and Candide. In a vigilant style, which has been deservedly admired, he transforms rage into precision and allows events to speak with their own inherent irony.”

His grandparents were indentured servants who had left India when the Great Famine left them with no choice but to flee the country. His father Seepersad inspired him to be a novelist.

Naipaul ended up moving from Trinidad and Tobago to study at Oxford and he worked as a journalist on a part-time basis with the BBC. When he spoke about his writing process, he often referred to how he was entirely self-taught. He learned about writing from the act of writing itself.

His initial novels were set in the remote region of Trinidad and Tobago. It was A House for Mr Biswas that established Naipaul as a fixture in the British literary scene. His voice is tinged with irony and even his non-fiction has the aspect of fiction. During his Nobel Banquet Speech, he told a little tale of how his watch stopped when he arrived in Stockholm. For him, storytelling was the only mode of expression.

His legacy is, however, one of contradictions, his views are often accused of being controversial and misogynistic.

Ramayana Masam or the Month of Ramayana is an important month especially in the southern state Kerala, India. It is observed in the month of ‘Karkidakam’, which refers to the monsoon season between July to August. During this time, the Ramayana epic, which tells the story of Ram and Sita and the travails they face, is read in Hindu households; no other auspicious events take place at this time, only treatments and prayer.

Ramayana at the Pothi.com Store

This is the right time to speak about some Ramayana editions that have been self-published at the Pothi.com Store:

You can see pencil sketches of the Ramayana in a book by Hiru Ray.

Adhyayma Ramayanam by Ezutthachan is a Malayalam poem where a parrot recites the Ramayan to Parvati at Shiva’s bidding. Dr. Sukumar’s book Ramayana in 30 Days is an English translation of this Kilipattu or bird song, thereby making it accessible to non-Malayalam readers as well.

Geeta Kasturi is a scholar and author who compares the poetic renditions of the Ramayana. Check out Triveni Sangam.

The 2021 theme for the day is Transforming food systems: Youth Innovation for Human and Planetary Health. As the population grows, there are more and more challenges that younger people must face. The planet needs to be restored to its natural equilibrium and biodiversity must flourish if we want to have food systems that benefit all of mankind.

On that note, Pothi.com would like to celebrate the voices of some of our young writers at the Pothi.com Store:

Footprints on the Moon

A Window to Young Minds

A Window to Young Minds is the first of the yearly anthologies, Short Stories by Young Writers. The twenty-three wonderful stories in this book are handpicked from 2017 contest entries. The talent of these young writers shines in their command of storytelling and their unique take on genre—from a pirate love story to the Hindenburg disaster on May 6, 1937, in New Jersey.

YOUNG VOICES features fifteen pieces of fiction from fifteen student writers from around the world. Whether discussing social issues, pondering everyday truths, or examining human relationships, the authors in Young Voices are doing us all a great service. We need them and their artistic peers to keep observing humanity around them and let their words and images move us forward, indeed, to truly guarantee us all a better tomorrow.

Not by a young adult but pertaining to communicating with them. The myths of adulthood and understanding teenagers in the new age have been busted.

Which book for or by young writers have you enjoyed recently?

More and more readers are beginning to feel that they are doing justice to a book by listening to it. After all, in India, story has always been more of an oral tradition than a written one.

Even at our BYOB Parties, we had several readers speak about the audiobooks they had listened to including Born a Crime by Trevor Noah; Let Your Mind Run: Thinking Your Way to Victory by Deena Kastor, Olympian runner;  Lincoln in the Bardo by George Saunders; and poetry books as poetry is best listened to.

On that note, we attended the extremely informative workshop ‘Creating an AudioBook Future’ hosted by BEAT Technology in partnership with All About Book Publishing.

The event that was held on Aug 3 included Q&A with experts about creating an audiobook strategy, including curating a list, selecting narrators, studio recordings and marketing.

Some Takeaways From the Session:

What audiobooks have you been listening to recently?

Maithili Sharan Gupt was born in Uttar Pradesh on this day in 1886. He is well known for bringing to the fore the pain of unacknowledged women characters in mythology and history. He was the voice of the shadows. 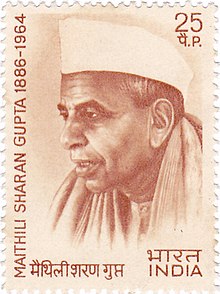 At one of our BYOB Parties, one of our reader friends spoke about Maithili Sharan Gupt’s classic work Saket (Saket means Ayodhya-vasi or one who lives in Ayodhya). In this rendition of the Ramayan, the author speaks from Lakshmana’s perspective and portrays his wife’s Urmila’s resilience and poetically renders the pain of separation that she must endure. These themes also appear in Yashodhara, where Buddha’s wife laments over her husband’s choices.

Maithili Sharan Gupt was a proponent of plain dialect (Khari Boli) poetry and his poems revolve around the epics of Hinduism and Buddhism. He was a recipient of many awards including the Padma Bhushan and he was christened Rashtra Kavi by Gandhi. Maithili Sharan Gupt is most loved for the way he deals with his female protagonists as he was progressive for the time.

He was an honorary member of the Rajya Sabha where he shared his poetry about matters of national importance.

Coloring Books in the Twenty-first Century

Come 2015 and Johanna Basford revolutionized the coloring book industry, selling 21 million copies of her coloring books (Worlds of Wonder and Enchanted Forest among others)! Watch her talk about her inky evangelism and going analog.

Coloring books at the Pothi.com Store:

After books, friends are the best! This International Friendship day, we thought we would hunt down some books that feature friendship. There will be many more books that we can add to this list, so feel free to mention this in the comments and share this post with your besties.

The Interestings is a story that unwinds from the Me-decade, the disco 70s. What happens when some of the friends in a close-knit group end up being super successful?

Amir and Hassan fly kites together in Kabul but their destinies are very different. Read The Kite Runner if you haven’t already.

Explore the biological, psychological, and evolutionary foundations of friendship in the non-fiction book  Friendship. From tribal life to corporate cubicles, friendship has been an essential part of social life.

An unputdownable saga of friendship set in the backdrop of Naples, Italy in the 1960s. Read My Brilliant Friend and the rest of the Neopolitan novels.

A cute and cuddly friendship-special comic book. It’s a book you will adore!

Munshi Premchand was born on this day in 1880. He is the first writer who made realistic Hindi fiction so accessible to readers. Some of his famous works include Gaban, Seva Sadan and Godaan.

Twelve Facts About One of the Greatest Authors India has Produced

Which Premchand story do you love?

Helen Beatrix Potter was born on this day in 1866. We all remember her for her remarkable children’s books featuring animals such as Peter Rabbit, Jeremy Fisher, Jemima Puddle-Duck, Mrs. Tiggy-Winkle but she was also a natural scientist, mycologist, prize-winning breeder of Herdwick sheep, farmer and conservationist. Her family had inherited the wealth that came from the Lancashire cotton mills, the infamous industry that crippled India’s textile economy. The Potters preferred to ignore their past and live a life of upper-middle-class comfort.

Beatrix Potter and her brother Bertram led a life where art and imagination held sway. They were deeply connected with animals and owned several rabbits, squirrels, bats, birds and insects. Potter’s early sketches paved the way for her future as illustrator with no rival. From a young age, she journaled and was privately tutored in astronomy, botany, entomology, etc.

She had a scientific bent of mind and her detailed drawings of fungi reveal her keen interest in pursuing her scientific passion but it was not to be.

Her keen interest in fairytales and fantasy and her wide reading enabled her to start her career as author-illustrator. She was fiercely independent and was enterprising enough to design Christmas cards and sell them.

She also wrote detailed letters filled with the germ of her future stories. One such letter to a sick child featured the famous bunnies Flopsy, Mopsy, Cotton-tail and Peter – this letter was self-published as The Tale of Peter Rabbit. After multiple rejections by publishers, her book was later acquired by Frederick Warne & Company.

She even patented the Peter Rabbit doll and introduced the idea of character-based merchandise such as wallpaper, games and toys. She authored 30 books and her books continue to sell throughout the world in different languages and were adapted in songs, films and even ballet.

Later in her life, her interests were aligned with the conservation of the Lake District where she lived with her husband.