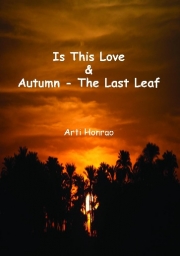 Is This Love & Autumn - The Last Leaf

Reviews for the book can be read here >
http://www.artihonrao.net/p/reviews.html

Synopsis of Is This Love:

IS THIS LOVE opens with a respect for friendship that Vishaal and Sheetal share. They live together and conduct themselves as being rational, mutually understanding and admiring friends. Even though both share the same roof, they are nowhere near to being lovers. At least not until Sheetal starts dating Aman and Vishaal starts missing her. Sheetal’s absence gives Vishaal a lot of time to ponder over his feelings towards her. Having convinced himself over his love for Sheetal, he decides to help her with her marriage to Aman; after all, what matters the most is who Sheetal loves to be with.

Sheetal is a smart, independent, and outspoken woman. She has no qualms about her friendship and living-in arrangement with Vishaal, and does not attempt to hide or justify this friendship to anyone. Workplace romance was inevitable between Sheetal and Aman. She has his photo beside the bed so that she could go to sleep looking at his smile. But… did she really love Aman?

Aman is very much in love with Sheetal, but loathes the thought of her friendship with Vishaal. Yet, he stands by his ladylove when his parents confront her over Vishaal and her relationship. He marries Sheetal much against the wishes of his parents.

Marriage was not a bed of roses for Sheetal. Her visit to catch up with Vishaal starts infuriating Aman. Aman’s parents were not of much support either, reflecting contempt at every gesture. One day, Aman’s simmering skepticism erupts as blows. Deeply hurt both on the inside and on the outside, she turns to Vishaal for solace, yearning for Aman in her heart. The doorbell rings on an unsuspecting afternoon. But, is it Aman at the door? Or did his intentions take shape? What provoked Aman to manhandle Sheetal on that fateful day? The events that follow, takes us through the course of love, life and trust amongst the three.

Synopsis of Autumn - The Last Leaf:

AUTUMN - THE LAST LEAF starts on a scary note over a dream which Neha calls a premonition. She sees that her friend Cathy is in danger and sends Vishaal over to Cathy’s place in an effort to avert this oncoming danger. But the inevitable has already occurred. Devastated over the recent happenings, Vishaal nurses Neha back to normalcy. During times of delirium, and the dream or vision that followed, Neha starts observing the change in her approach towards Vishaal. During the brief time while both spent time away from each other at their respective hometown, Neha becomes convinced about her love towards Vishaal and decides to surprise him by confessing her love in person. Little did she know that fate had already planned a surprise for her.

Vishaal, accompanied by his wife Sheetal, greets Neha at the airport. Shattered and angry over the turn of events, Neha still decides to face the situation head-on. To her surprise, she finds Sheetal a charming hostess and a great partner for Vishaal. Yet, she continues to ponder over the dream she once had during those delirious days, while Vishaal nursed her. She decides to play tooth fairy, and offers financial assistance to Vishaal over his “Dream Project”. It so seems that Neha is always followed by “dreams” in every walk of her life. She just can’t shake them off.

Another “dream” shakes Neha out of a deep slumber. She sees Sheetal being murdered and the maid walking away with the diamond necklace that Neha had once gifted. Fortunately, or unfortunately, she is not able to identify the murderer in her dream. In spite of Neha’s best interests, Sheetal falls prey to destiny’s events. As providence would have it, now it is Neha’s turn to return the favour. She gives her heart and soul to salvage the pieces of Vishaal’s personal and professional life.

Vishaal seems to have hit an abyss with Sheetal’s death. All the care and concern that Neha is giving him was beginning to look like a waste. Totally devastated over her unsuccessful attempts to bring Vishaal out of mourning, she decides to let her emotions and lust rule over intellect. Was she able to get back the same Vishaal she once fell in love with? What is bothering Vishaal that he is so desperately trying to forget? Does Neha’s dream hold the key to all these unanswered events?

What you feel deep within you is more important than what you think you feel...
Reaching that deep within place is not too difficult; you just need to cut off the chaos,
Go on a walk, spend some time with nature, listen to music, do something you really enjoy doing and not do it only because you have to...”

These lines by Arti herself perfectly sum up Arti’s writing and all that it stands for. Her writing represents feelings more than thoughts, insight more than opinions.

When you read her stories, or talk to her about them, you realize that she has lived her stories, each word, each character as though they were a part of another world, a world that she could open for us through her stories. Her blog 'You me and stories' is one such sneak peek into this amazing realm of love and relationships.

Author of fiction books 'My Life-story' and 'Is This Love & Autumn - The Last Leaf', Novel 'Resemblance - The Journey of a Doppelganger' and ‘Love Stories’ – compilation of 30 Short Stories on Love & Relationships, Arti is quite prolific and has written several poems, short stories, blog posts and more. She is an avid reader, an active blogger and a gifted photographer. Her unique way of depicting feeling and emotions, a simple yet skilful use of language and believable characters make her writing truly different. As the author herself admits, she does take words and dip them in feelings! The result is often a sweet and savoury read that keeps the reader asking for more!
A true Mumbaikar at heart Arti is single and currently lives with her parents.

Colors of Life in black and white by Tanmoy Das

Honestly, this would be the first time, I’m writing something for someone else. Wait, i wrote a poem once, for a Children’s Day function of my niece. So here it goes.

Arti Honrao: I know her, through twitter, from a long time. A little confession, i kinda liked her writings and her writing style, since the day one. Though, several times, I have complimented/commented about her writings, personally to her. But in writing, this would be the first time.

Today only, I got her book “Is This Love & Autumn – The Last Leaf” and I was not able to stop myself and wanted to read it in one go. I just completed “Is This Love” and I’m here to write, how I felt about it. I completed the story in 3 hours, which includes a dinner and coffee break too.

Is This Love: First thought, after reading it, comes in mind is, “Feelings/words not expressed/said at the right time, should not be expressed/said, when it is too late.” but the second thought, “It is never too late, to mend things.” That’s what Vishaal and Sheetal did, at the end.
Firstly, it was wrong on Vishaal’s part, to hide his feelings from Sheetal. But then he wanted to see her happy, no matter what.
Secondly, it was wrong on Sheetal’s part, not to talk to Vishaal about his feelings for her, when she also started to feel the same. But then, she was feeling guilty conscious. (guilty conscious for what? you have to read the book for that ;)
Thirdly, I don’t want to say anything about Aman, because, honestly, I didn’t like his character, at all.
I loved the purity and honesty of the bond Sheetal and Vishaal shared, when they were friends and when they realized they love each other, but pretended to be friends forever.
But as they say, “All is well, that ends well.” and they lived happily ever after.

I simply loved both the stories, mainly because of the author's simple yet powerful narration. Arti has bought the characters alive.

I could feel Sheetal's pain, Aman's jealously and Vishaal's helplessness in Is This Love. The small confusions and assumptions that we tend to make in life sometimes leads to big blunders. Some people are fortunate and they get a second chance but will Vishaal and Sheetal get a chance is what we need to see.

Autumn-The Last Leaf is more like a thriller where the suspense unfolds slowly and when you reach the last page you are left speechless.