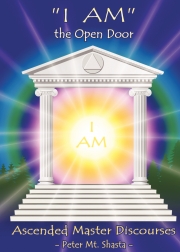 "I AM" the Open Door

Great Mahasiddhas known in the West as Ascended Masters, appeared to Peter Mt. Shasta to dictate these I AM teachings on how to contact your Higher Self-the Atman-and bring its consciousness into daily life through the use of I AM Affirmations. Ten different masters appeared over the course of ten days to give these fourteen life-changing discourses. It is not just the message they give, but their tangible energy that can be felt as you hold this book in your hands, that opens the door to higher consciousness and mastery.

An Ascended Master is a God-like being who was once in human form, but who achieved perfection through meditation and self-examination, and was eventually able to merge with their Higher Self, the I AM Presence (Atman in Sanskrit, known in Buddhism as the Dharmakaya, the body of Dharma). It was these beings, long spoken of in Theosophy, who visited Peter Mt. Shasta to give these discourses.

Peter Mt. Shasta visited India beginning in 1970, and had the darshan of numerous saints, including Neem Karoli Baba, Anandamayi Ma, and Sathya Sai Baba. After returning to California the Ascended Master Saint Germain appeared before him in a physical body and directed him to Mount Shasta, where he received the I AM teachings of various Ascended Masters under the guidance of Pearl Dorris. She was head of the I AM Sanctuary of San Francisco under the direction of Godfre Ray King, author of "Unveiled Mysteries." Peter currently lives in Mount Shasta, California, where on occasion he gives teachings.

Other teachings of Peter Mt. Shasta, including books and videos, can be found on his website: www.I-AM-Teachings.com

Anger (In Punjabi) by Dada Bhagwan
Reviews of ""I AM" the Open Door"
No Reviews Yet! Write the first one!
Please register or login to write a review.