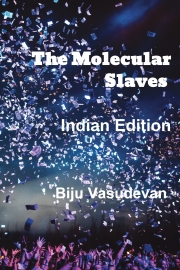 Biju Vasudevan was born in Haripad, Kerala, and came to Rourkela at the age of six months. He completed his education from Ispat English Medium School, Rourkela, where he did his Matriculation and Undergraduate Courses. Thereafter he joined National Institute of Technology, Rourkela from where he graduated in Mechanical Engineering. After a brief stint in ITC (BATCO) he joined SAIL, Rourkela Steel Plant and has lived most of his life in Rourkela. He has served Salem Steel Plant too for some period and is presently working as Assistant General Manager for State Enterprise of Steel Authority of India, Ltd at Rourkela Steel Plant. An excellent conversationalist and a storyteller beyond compare, his poetry and writing brings characters to life and has an almost surreal feel to it, which hooks the readers from the first page. His books have well received internationally and even been called 'Kafkaesque' by independent literary critics. The Molecular Slaves, written in 2015 is his second book, and this Indian Edition has been brought out to make this internationally and critically acclaimed work accessible to Indian audiences at an affordable price. His books include The Contract (2014), The Molecular Slaves (2015), Lying in State (2016), Kamayakshipuram (2016), Yakshipuram (2016), and The Next Door Raghu, (2017). He is also a martial artist, guitarist, and a creative musician. He is married to Jyothi and has a daughter Arundhati and a son Venugopal.
You can know more about his works and also read the reviews by international critics at www.amazon.com/author/bijuvasudevan.

My Experiments with Half-truths by Rajendra Nargundkar
Reviews of "The Molecular Slaves (Indian Edition)"
No Reviews Yet! Write the first one!
Please register or login to write a review.