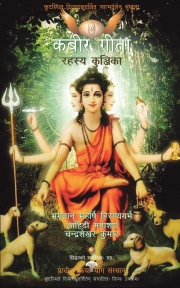 Once a certain level of spiritualism is reached with the intense and ardent practice of esoteric and secret Pranayama, the Prana, which is flowing upwards through the spinal chord, enters the cave-gateway of Kutastha, which is located midway between the eyebrows as The Third Eye. As soon as it enters the Kutastha, a divine process of subsumption of the entire breath follows the trail. At this very moment, the auto-revelation of the divine sound of AUM (Om) happens which is ever resonating armored with out-worldly aural-visual attributes. This is the divine Sound-Light of the Inner-Self.

This gross body is an outer manifestation of the form of Omkar. This is known as Kabir.

This is Kutastha Darshan, self-witnessing the self-illuminated divine Self. In this state, the concept of time ceases to exist, insinuating to an inexpressible yoga-born state, which is just about to manifest spontaneously. It is an indestructible and most esoteric link to a para-world which can be known only through spiritual experience.

There is a mystical reversal of time by Pranayama.

Since ancient times, yogi has been pledging and accepting its universal privacy. True seekers are often confused with the inherent complications of this intangible and esoteric oriental science and gets deluded by the widespread misconception of associating the Self with the external sound of AUM (Om).

Meaning of the mystic word Gita is a musical description via singing of the divine state experienced at the After-Effect-Poise of Kriya also known Parawastha of Kriya.

In this scripture, there is a detailed description of the secret dialogue between Lord Maharishi Dattatreya (Kutastha) and Yogi Kabir. The essence of this divine conversation is engraved in the scripture.

In the ancient times, this experiential knowledge (Vidya) was inter-located within The Third Eye of Maha-Kaal (God of Space-Time), which got dissolved in the currents of time as per the divine-wish of Maha-Maya (nature). Many sages and monks received one part or another based on their austere yoga-practice which is available in parts within Dattatreya Tantra, Kaya Siddhi Tantra, other Upanishads etc.

A profound sage and householder mystic of Ancient Kriya Yoga Mission(A Divine Enterprise Empowered by The Third Eye)(A Monastery of Realized Sages) has regained the inner experiential wisdom of Kabir Gita with his intense devotion to Yoga and arduous practice of esoteric Pranayam (The Art and Science of Breathing). This work is replete with these cognitive sensory perception-borne and experiential wisdom. This work is unique evidence of true out-worldly incidents and experiences borne out of the intense practice of Pranayam.

A Sadhak passes through infinite number of states during his Sadhana. Period of stay in any state varies depending on the peculiarities of that state as well the predicament of the Sadhak. During this course, the outer symptoms may not be described and grasped as aptly as inner symptoms. Outer symptoms like trembling and/or levitation of body often lead to bewilderment and amusement of the beholder. Whereas being in the same state, it leads to calm acceptance and grasp of what is happening to someone else being in that state.

Most of the yogis and historians often attribute the existence of Kabir Gita to Yogic scriptures like Dattatreya Tantra, Kaya Siddhi Tantra etc. Whereas a Sadhak realizes, when time is ripe for him, that this is an eternal and universal Vidya (Knowledge) and the particular Shabda is eternal, ever present, everywhere, perceptible to one only when one is ready during his course of Sadhana, including listening to these being chanted/sung by Siddhas, all the time, beyond the time.

This book is dedicated to all the Sadhakas.

Chandra Shekhar Kumar is a direct disciple of Lord Maharishi Hiranyagarbha. He is Founder of Ancient Kriya Yoga Mission and Co-Founder of Ancient Science Publishers. He holds a degree of Integrated M.Sc.(5 yrs) in Physics from IIT Kanpur.

Amor Sempiternus: The Undying Love of Sri Ramana Maharshi by A.R.Athreya
Reviews of "Kabir Gita Rahasya Kunjika"
No Reviews Yet! Write the first one!
Please register or login to write a review.