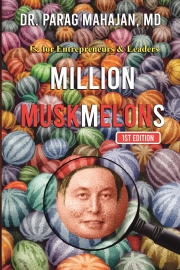 How would you like to be like Elon Musk?
How could you change the world if you thought and acted like he does?
Could you make a difference that would be felt for generations?
Elon Musk is best known as the billionaire owner of innovative and forward-thinking companies such as SpaceX and Tesla. His will, to keep pushing past the boundaries that many others cannot, has seen him at the forefront of ideas like human colonization of Mars and Hyperloop transportation. But what if more of us were like him? Where would that lead the human race?
In this book, Million Muskmelons, the idea of the world having a million Elon Musks and how they could contribute to society is deliberated, with consideration into the effects that would have on:
Interplanetary travel
Human settlements on other planets
Elimination of world poverty
Halting of climate change
Improvements to infrastructure
Artificial intelligence
And much more…
The planet would feel the benefit of even one more Elon Musk and progress would be much faster as a result.
Could the next one be you?
Read Million Muskmelons now and see if you possess the traits and habits that are required to be the next great innovator of our time!

Dr. Parag Mahajan is an Accomplished Entrepreneurial CEO of multiple Healthcare Start-ups, Radiologist, Clinical Informatician, Teacher, Researcher, and Author. His current interests include the development of Start-ups in the fields of Artificial Intelligence in Healthcare, Blockchain in Healthcare, Electronic Health Records, and Medical eLearning Systems.

vihaan by brijbala bhalla
Reviews of "MILLION MUSKMELONS"
No Reviews Yet! Write the first one!
Please register or login to write a review.