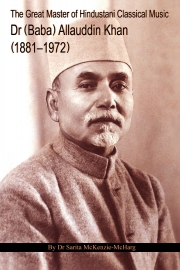 The essential research and findings of this book lie in an analysis of currently available documentation—in the form of biographies, books, journals, newspaper articles, essays, manuscripts, letters, interviews and websites—on the life of the late North Indian (Hindustani) classical musician, composer, innovator and teacher, Dr (Baba) Allauddin Khan.
The author's intention:
– To compile a substantial report on the origins and formative life experiences of Dr Khan
– To confirm his uniqueness as a musical genius
– To demonstrate his pre-eminent position as the major influence in changing traditional concepts and other important elements of Hindustani classical music
– To proclaim and substantiate that his true musical legacy (music as a form of worship) is not afforded appropriate recognition and has been diluted by musicians and scholars alike.

Malabar to Malaya by Ravindran Raghavan

In Kerta Park by Brandon McYntire

This is an amazing story of dedication, perseverance and the triumphant rise of a runaway Indian boy who would eventually inspire thousands of musicians around the world. This book illustrates how Baba Allauddin Khan led the way in a modern renaissance of Indian classical music, displaying profound appreciation for the spiritual value of music and its importance to society. And how, after many years of self sacrifice and struggle, he developed a rich and abiding love and understanding of music that stood him apart from his peers.

The book also demonstrates how Baba rekindled the flame of passion for Indian classical music and brought about the greatest surge of interest in Indian music that the world has ever witnessed. It addresses issues regarding his ancestry, his childhood, his travels and travails, and goes on to tell the most complete and objective story of his musical achievements.

Finally, it illustrates how he learned from every possible teacher, beginning with his father, brother (and their teachers), sadhus, temple singers, street musicians, and later in life, some of India's finest masters. He never shied away from difficulty nor weakened in his resolve; and as a result of his intense learning, was able to impart an incredible body of knowledge and understanding to his disciples over a period of more than fifty years.