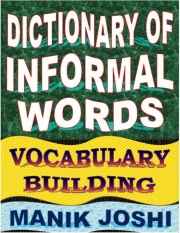 What are “Informal Words?”

abs [noun] -- the muscles of the abdomen

ack-ack [noun] -- the non-stop firing of guns at aircraft

adman [noun] -- a person who works in advertising or promotion

adore [verb] -- to be very fond of something

aggravate [verb] -- to intentionally irritate somebody

a gogo [adjective] -- in large quantities

allergic [adjective] -- having an aversion of somebody/something

all right [adverb] -- used to emphasize something

Aussie [noun] -- a person or native from Australia

axe (ax) [verb] -- to kill somebody with an axe | to get rid of a scheme, service, system, etc. | to dismiss somebody from their job

ace [verb] -- to be successful

all-nighter [noun] -- a time when somebody stay awake all night, mainly for studying

any [adverb] -- ‘at all’ [used at the end of negative sentences]

A-OK [adjective] -- in satisfactory or perfect condition, manner or style.

afters [noun] -- a sweet dish that is eaten after meal

all-singing, all-dancing [adjective] -- (of a machine) having a advanced features

Manik Joshi was born on Jan 26, 1979 at Ranikhet and is permanent resident of Haldwani, Kumaon zone of India. He is an Internet Marketer by profession. He is interested in domaining (business of buying and selling domain names), web designing (creating websites), and various online jobs (including 'self book publishing'). He is science graduate with ZBC (zoology, botany, and chemistry) subjects. He is also an MBA (with specialization in marketing). He has done three diploma courses in computer too. ManikJoshi.com is the personal website of the author.

HANDBOOK OF CHEMISTRY by SOURAV DAS

MY TEACHER’S GUIDE TO ENGLISH GRAMMAR by Aswathi Jijin

ALPHABET OF EDUCATION by PARIMAL P. GOHIL
Reviews of "Dictionary of Informal Words (eBook)"
No Reviews Yet! Write the first one!
Please register or login to write a review.