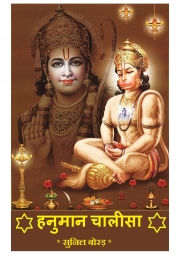 With Meaning in english and hindi

It is traditionally believed to have been authored by 16th-century poet Tulsidas in the Awadhi language, and is his best known text apart from the Ramcharitmanas. The word "chālīsā" is derived from "chālīs", which means the number forty in Hindi, as the Hanuman Chalisa has 40 verses (excluding the couplets at the beginning and at the end).

Hanuman is a vanara (a monkey-like humanoid deity), a devotee of Rama, and one of the central characters in the Sanskrit epic Ramayana. Folk tales increasingly eulogise the powers of Hanuman, and he is considered by many to be an avatar of the god Shiva. The qualities of Hanuman – his strength, courage, wisdom, celibacy, devotion to Rama and the many names by which he was known – are detailed in the Hanuman Chalisa. There are more temples devoted to Hanuman than any other deity in India, and recitation or chanting of the Hanuman Chalisa is a common religious practice.

TULSIDAS (also known as Goswami Tulsidas) was a Hindu poet-saint, reformer and philosopher from Ramanandi Sampradaya in the lineage of Jagadguru Ramanandacharya renowned for his devotion to the Lord Shri Rama . A composer of several popular works, he is best known as the author of the epic Ramcharitmanas, a retelling of the Sanskrit Ramayana based on Rama's life in the vernacularAwadhi.
Tulsidas was acclaimed in his lifetime to be a reincarnation of Valmiki, the composer of the original Ramayana in Sanskrit.He is also considered to be the composer of the Hanuman Chalisa, a popular devotional hymn dedicated to Hanuman, the divine devotee of Rama.
Tulsidas spent most of his life in the city of Varanasi. The Tulsi Ghat on the Ganges River in Varanasi is named after him. He founded the Sankatmochan Temple dedicated to Hanuman in Varanasi, believed to stand at the place where he had the sight of Hanuman. Tulsidas started the Ramlila plays, a folk-theatre adaption of the Ramayana.
Tulsidas has been acclaimed as one of the greatest poets in Hindi, Indian, and world literature. The impact of Tulsidas and his works on the art, culture and society in India is widespread and is seen to date in vernacular language, Ramlila plays, Hindustani classical music, popular music, and television series.

The essence of Bhagavad Gita by P.V.S.SURYANARAYANA RAJU.

Don't Be Sad -Be Happy by BALDEV BHATIA
Reviews of "Hanuman Chalisa (eBook)"
No Reviews Yet! Write the first one!
Please register or login to write a review.