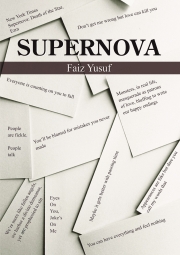 "Yusuf creates for us the experienced guide that we all wish we had to reassure us passing through the stormy emotions of youth... it attests to his worldliness and a wisdom well beyond his years."
- Elena Jacobson, CEO, Infinity Advisors.

'Supernova' is a result of when years later from a car accident and completely disappearing from the scenes, Ezra, a former well-known musician, decides to takes his narrative in his own hands from way media had twisted it previously.

Though born as an orphan, Ezra happens to open up a donated present- a guitar and through the help of internet videos, he learns how to play it. He accidentally comes across the Assistant Manager in Universal Music Records. A striking conversation with him leads him to see the potential in Ethan’s words. New York Times hails him as the “next big thing”. Until he realises what can push you up can pull you down with the same force.

'Supernova' is a detailed story of how a person gets more than what he wishes for and loses more than he could bear.

Faiz Yusuf was born in 1999 in the city of Patna in Bihar, India. Currently pursuing Economics Honours from Ashoka University, he is inclined towards writing, reading and music. He wrote his first book at the age of 12 and since then have got an opportunity to get three books published under his name including “Pictures of Life”, “The Farrago” and "Supernova". Throughout his school life, he has taken part in numerous inter-school literary competitions, being a part of Times of India Junior Editor Board as well as bagging prizes in various National Youth Parliaments and MUNs. Furthermore, he is a recipient of Scholars’ Badge and performs Slam Poetry, one of his performances being featured on the official Youtube channel of 'Your Quote'. He has interned for HarperCollins Publishers India and Penguin Random House India as well as has done Poetry Workshop from California Institute of Arts. He also has had the opportunity of working for United Nations Global Compact and UNESCO. Looking forward to an upcoming summer semester at London School of Economics, in addition to having done online courses from Harvard University, California Institute of Arts and United Nationals Council of Research, he has been consistently good at studies, including receiving a letter of appreciation from Education Minister of India. Being an avid public speaker and have written for various magazines, he wishes to pursue a career in Economics while keeping his zest for writing animate.

Back to the Roots by Anand Sood

The Space Mission by Ratul Banerjee

Ondhokarer Kobita by Subhajit Ganguly
Reviews of "Supernova"
No Reviews Yet! Write the first one!
Please register or login to write a review.