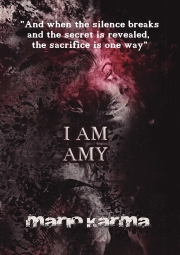 Two sisters as equal as the two poles of the earth... One benign and permanent victim... the other with a dark personality but with protective instincts... Melina weak and submissive... Amy, a judge and punter in her own world in which God always showed his toughest face. What separates madness from logic? God from the Devil? The good from evil? These questions ceased to concern Amy when she felt deep within her soul that there was space for everything. And when the silence breaks and the secret is revealed, the sacrifice is one way...

Marios Karakatsanis is a contemporary Greek author. He was born on March 29, 1978 in Piraeus. Curiosity-driven from an early age, he was always fascinated by the strange, inexplicable, and metaphysical element; he liked watching horror movies, do jugglery tricks, and write poems. At the age of 13, he began to write his first work: a poetry collection where he described–always in his own personal way–his thoughts, worries, distress, as well as his personal experiences, both pleasant and unpleasant. Growing up, he never stopped writing, managing to significantly limit his dyslexia, even use it to his advantage by committing to paper all the images he had in his mind, no matter how difficult it was.

A Road to the Life I Want by Mohamed Aslam M

The Mysterious Forest by Sandeep

सीमारेखा by Deepak B. Kumar
Reviews of "I AM AMY"
No Reviews Yet! Write the first one!
Please register or login to write a review.