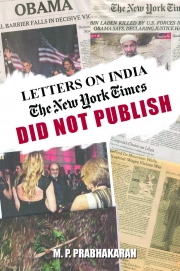 Letters on India The New York Times Did Not Publish

This is a collection of letters M.P. Prabhakaran sent to The New York Times during his three-decade-long stay in New York. He sent the letters whenever he spotted errors and erroneous slants in news articles, editorials and opinion pieces that appeared in the paper.

Very often, personal opinions of those who wrote the articles get accepted as facts, especially by readers who have only a smattering of the subjects opined upon. They get proper perspectives on those subjects when they are presented with contrary or variant opinions. Had the letters been published, that purpose would have been served. That did not happen. Hence the author’s decision to bring them to readers in the form of a book. Some of the letters also point out factual errors.

In bringing out the book, the author has done a great service to the newspaper-reading public in general and New York Times readers in particular.

After spending four decades in journalism and teaching, M.P. Prabhakaran is now enjoying his retirement. "By retirement," he hastens to add, "I only mean that I stopped working for others." He has been busier than ever working for himself, doing things he always wanted to do: reading, writing and travelling.

Prabhakaran has already authored three other books: The Historical Origin of India's Underdevelopment: A World-System Perspective, which is an adaptation of his doctoral dissertation; What Makes Islamic Turkey Different from Islamist Saudi Arabia; and Capitalism Comes to Mao’s Mausoleum. The last two are updated versions of his travel writings that appeared in The East-West Inquirer.

He began his career in journalism in Mumbai, in 1969, as a cub reporter on Current, a weekly newspaper (now defunct). He moved on, as a sub-editor, to March of the Nation, another Mumbai-based English weekly (also defunct now), and then to Free Press Journal, one of India's leading English dailies.

After immigrating to the U.S. in 1975, he worked as editor of The Voice of India, a monthly, and of South Asia Newsspecial, a news and feature syndicate. Since 2001, he has been travelling extensively and posting his travel experiences on The East-West Inquirer, an online monthly he started that year. The monthly, published at www.eastwestinquirer.com, also carries his social and political commentaries.

Prabhakaran taught for several years, as an adjunct professor of political science, at the City University of New York. He did it after completing his Ph.D. in Political Science at The New School for Social Research, New York.

Prabhakaran can be reached at prabha@eastwestinquirer.com

The Mal'lam Voyagers by Jim Leslie

लोकतंत्र by राजीव दुबे
Reviews of "Letters on India The New York Times Did Not Publish"
No Reviews Yet! Write the first one!
Please register or login to write a review.