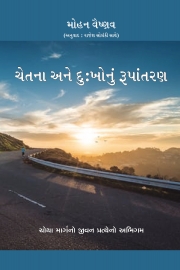 Consciousness and Transforming Suffering - In Gujarati

A Fourth Way Approach to life

Landscape of the Work:

It discusses Karma-Vikarma-Akarma, Karma-Yoga, and the relation among Karma, destiny and spiritual evolution. It also deals with attracting the better aspects of one’s luck, and a higher method of learning.

Mohan Vaishnav is an author, poet and corporate law professional based at Ahmedabad, Gujarat, India. He is a commerce graduate and an associate member of the Institute of Company Secretaries of India, New Delhi. He is having his office as a Practicing Company Secretary in Ahmedabad since 1997.

During the initial years of his practice, along with his practice in corporate laws, he developed a software package for computation of financial and tax related projected workings for next 10 years for assessing the future needs of the investment and working capital (1) for the proposed expansion in existing industrial units, as well as (2) for the enterprises who intend to start a new industrial undertaking. That time he sold this software package to many Corporates and Chartered Accountants.

In October, 2013 his first book, “All & Everything in Diagrams” was published by Narrow Gate Press, London MMXIII, 7, Riverside Drive, Richmond TW10 7QA, England. Then he wrote his second book “Sonnets of Shakespeare Explained” in July, 2014.

So far he has authored following books:

(1) All & Everything in Diagrams
(2) Sonnets of Shakespeare Explained
(3) An Organic Whole of All & Everything
(4) Consciousness and Transforming Suffering
(5) Theory of Everything
(6) Human Types
(7) Awakening, Dying and Re-birth

By synthesizing the ancient Vedantic knowledge with the findings of the modern sciences, his book, “Theory of Everything” presents a simple approach to understand the Universe and its workings, containing therein research work in Theoretical Physics, Mathematical aspects related with higher dimensions of Time and Space, various grades of Times (that is, time within time); and it also unfolds an idea how various sciences are placed in a connected way in the entire scheme of the whole.

Satyanarayana Katha by Bharatawanshi
Reviews of "Consciousness and Transforming Suffering - In Gujarati"
No Reviews Yet! Write the first one!
Please register or login to write a review.