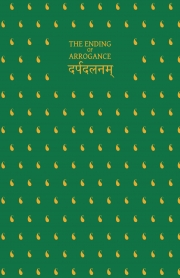 The Darpa Dalana is an unusual poetic work in classical Sanskrit from 11th century Kashmir. It is a satiric look at human attitudes as also a social comment on the times. Its 587 verses are spread over seven sets of vicaras or thoughts. These dwell on the main causes of man’s arrogance: family, wealth, learning, beauty, power, charity and sanctimony. All need to be understood and discarded for a better life.

Each discussion is enlivened with a story. They feature humans and animals as well as divinities. The hero of one is the Buddha in person, and of another the great god Siva, pointing to the poet’s own broad based outlook on belief. He is Ksemendra, a well known figure in Sanskrit literature, whose epigrammatic verses are also quoted in anthologies. His work includes critiques on poetics and prosody, devotional poetry, epic abstracts and social satires. Most seemed lost over time till the location and publication of 18 works over the last century and a half.

The Darpa Dalana was first published in the original in 1890, and translated into German in1915. Though quoted in works like A.K. Warder’s Indian Kavya Litrature of 1992, its full text is translated into English perhaps for the first time in this Rasala edition.

A.N.D. Haksar is a well known translator of Sanskrit works. A career diplomat for many years, ten of his translations have been published as Penguin Classics. They range over poetry, prose and drama, and include Ksemendra’s Three Satires from Ancient Kashmir and The Courtesan’s Keeper, both of which were till then virtually unknown to modern readers.

The Fires of Spring by Varsha Hebbar

Transpiring Tagore by Deepankar Choudhury
Reviews of "The Ending of Arrogance: Ksemendra's Darpa Dalana"
No Reviews Yet! Write the first one!
Please register or login to write a review.