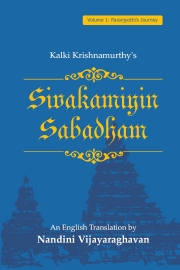 Watch a video trailer of the book at

A masterpiece by Kalki Krishnamurthy, recipient of India’s highest literary honour – the Sahitya Akademi Award,
‘Sivakamiyin Sabadham’ is a historical Tamil novel set in 7th century South India. The struggle for supremacy between the Chalukya Emperor, Pulikesi II, and the Pallava Emperor, Mahendra Varmar and at a later stage, his son, Narasimha Varmar, forms the core of the novel. The story begins with Pulikesi’s unanticipated invasion of the Pallava Kingdom and the ruses Mahendra Varmar employs to safeguard his kingdom and the capital, Kanchi. Mahendra Varmar is handicapped by his ill-equipped smaller army which is no match for the larger Chalukya army.

Pulikesi’s invasion is not Mahendra Varmar’s sole cause for concern. The impractical yet ardent romance between his only son, Crown Prince Narasimha Varmar and the beautiful and talented danseuse, Sivakami, the daughter of the land’s foremost sculptor, Aayanar, and the fate of Mamallapuram which Mahendra Varmar is in the midst of converting into a sculpture-filled “dream world”, weigh heavily on him.

The scheming Chalukya loyalist, Naganandi Bikshu, the young and brave Pallava army commander Paranjyothi, the mysterious Vajrabahu, the passionate sculptor Aayanar and the Pallava spies Shatrugnan and Gundodharan aid in the story’s progression. This intense and unforgettable narrative by ‘Kalki’ plays on the emotions of the readers and concludes with the least expected climax.

Excerpts from the book may be read at http://sivakamiyinsabadham.litintrans.com/

Other volumes of this novel may be purchased from

The author, an alumna of London Business School and a CFA charter holder, is a Director with Fitch Ratings at Singapore. She may be reached at admin@litintrans.com

THE RELUCTANT DAUGHTER by N.Jamir

A Princess of Mars by Edgar Rice Burroughs

Edge Of All The Light by Malathi Ramachandran

I had purchased the book recently... It was awesome.. Thank you, But just wanted to check if you people can add some pictures inside the book that was available in "http://sivakamiyinsabadham.litintrans.com/"...