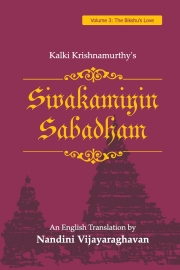 Watch a video trailer of the book at

The Moving Finger writes; and, having writ,
Moves on, nor all thy Piety nor Wit
Shall lure it back to cancel half a Line,
Nor all thy Tears wash out a Word of it.
-- The Rubáiyát of Omar Khayyám

Kalki echoes the above sentiment when he talks about Fate playing a role in Mahendra Varmar’s life. In this volume, he beautifully narrates the various manifestations of Fate.
After successfully fending off the Chalukya invasion and ensuring that the Chalukya army has no access to food and water, Mahendra Pallavar drives the Chalukya Emperor, Pulikesi, to call for a truce. The statesman in him is keen, however, to convert a foe into a friend. Mahendra Varmar thus invites Pulikesi and his retinue for a diplomatic sojourn in Kanchi and lavishes hospitality on them.
During an unguarded moment, the normally astute Mahendra Varmar reveals to Pulikesi in good faith all the ruses he had employed to counter the Chalukya invasion and also commits the faux pas of remarking on Pulikesi’s lack of interest in the arts. These statements goad the disillusioned and vengeful Pulikesi to renege on his commitment to cease hostilities.
Two battles are subsequently fought between the Pallavas and the Chalukyas. While the Pallavas are successful in chasing the Chalukyas away, Pallava Nadu bears the brunt of Pulikesi’s wrath. The Chalukyas amputate the limbs of sculptors, imprison young men and women, set entire villages on fire and destroy the crops.
Fate wields its unpredictable hand further. A rash decision by Aayanar and Sivakami results in Sivakami being abducted by the Chalukyas and her subsequent ‘oath’. But these incidents also enable Mahendra Varmar to shape Narasimha Varmar’s future in a manner he had always envisaged. Don’t miss the action-packed third volume of ‘Sivakamiyin Sabadham’, which sets the stage for the startling climax of this magnum opus in the fourth and final volume.

Excerpts from the book may be read at http://sivakamiyinsabadham.litintrans.com/

Other volumes of this novel may be purchased from
Volume 1: http://pothi.com/pothi/book/nandini-vijayaraghavan-sivakamiyin-sabadham-english-translation-volume-1
Volume 2: http://pothi.com/pothi/book/nandini-vijayaraghavan-sivakamiyin-sabadham-%E2%80%93-english-translation-volume-2

The author, an alumna of London Business School and a CFA charter holder, is a Director with Fitch Ratings at Singapore. She may be reached at admin@litintrans.com

My Virginity Isn't A Criteria by Shivam Singh

Kill the Girl by Abijit Radhakrishna
Reviews of "Sivakamiyin Sabadham - An English Translation (Volume 3)"
No Reviews Yet! Write the first one!
Please register or login to write a review.