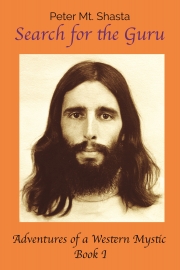 Search for the Guru: Adventures of a Western Mystic, Book I

In the tradition of Yogananda's "Autobiography of a Yogi," this is the first part of Peter Mt. Shasta's adventures on the quest for a spiritual teacher and, ultimately, enlightenment and self-mastery. It gives the fascinating personal story of his earliest memories prior to birth and traces his awakening in youth to the first moments of expanded consciousness. It tells poignant stories of his days in New York City, living on the Lower East Side, and his call to India after hearing Baba Ram Dass interviewed about his transformation from Harvard professor to follower of the guru Neem Karoli Baba (Maharajji). Peter travels to India and meets not only Maharajji, but Anandamayi Ma, Sathya Sai Baba, and many other saints and illumined beings. Gradually, he begins to realize that the guru he is looking for is within himself, and returns to the West. He gives fascinating accounts of his experiences in America with Trungpa Rinpoche, Chagdud Rinpoche, Joseph Sunhawk, and others. The book ends with him driving across the Golden Gate Bridge, heading for a rendezvous in Muir Woods with the Master Saint Germain, who offers him liberation. To read of this meeting and the adventures that follow with the Ascended Masters, read the next part of his autobiography, "Apprentice to the Masters: Adventures of a Western Mystic, Book II."

Peter Mt. Shasta lived near Woodstock, New York, and was fully involved in both the beatnick and hippies movements of the 60s and 70s. He was given his last name by the Ascended Master Saint Germain, who visited him on the slopes of Mount Shasta after his first trip to India. He had been on the spiritual quest since hearing Baba Ram Dass interviewed on the radio, and had left soon after to visit Neem Karoli Baba, then Anandamay Ma, Sathya Sai Baba, and many other saints, mystic, and lamas. On his return to California, wanting to leave his body and return to the spiritual world, Saint Germain materialized before him and sent him back to Mount Shasta, where he was instructed by Pearl Dorris, former Director of the I AM Activity in San Francisco, on how to bring the I AM Consciousness into daily life as a master presence in service to humanity.

He presently lives in Mount Shasta, where he helps those who seek these teachings.

EYES BUT NO VISION by Wayne A. Clarris

Satyanarayana Katha by Bharatawanshi
Reviews of "Search for the Guru: Adventures of a Western Mystic, Book I"
No Reviews Yet! Write the first one!
Please register or login to write a review.