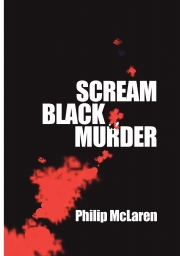 “I got her to pull the groceries from her shopping bag, there were a lot of things to eat, like bread, cheese and other stuff. So, I told her we would eat first. She was pretty scared and kept asking me not to kill her, that she would do whatever I wanted. I wanted to eat first.”

McLaren weaves a spellbinding tale of suspense and danger, taking us into the killer’s peculiar world of challenge, chilling calm and twisted humour. Two young detectives are assigned to the case, but their superiors are part of the problem – they are racist and virtual enemies. The media circus doesn’t help, until it hooks an unexpected caller. This is raw truth, with an edge of compassion – and the forensics.

“… Scream Black Murder is a superb novel that’s both tough and tender… as evocative as Walter Mosley’s series about the black ghettos of Los Angeles. High praise but McLaren deserves it.”
Sydney Morning Herald

“Excellent characterisations and a seasoning of racial and sexual tension.”
Sydney Sun-Herald

“One of the top thrillers of the summer.”
Canberra Times

And the Bubble Bursts by ujjwal sourav

SLICES OF LIFE by Debadisankar Ray
Reviews of "SCREAM BLACK MURDER"
No Reviews Yet! Write the first one!
Please register or login to write a review.