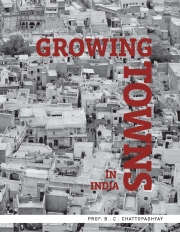 Description of "Growing Towns In India"

India is among the fast-growing economies of this era. Its recent rapid growth has drawn much attention to its technology sector. Much of India's growth and growth potential, however, is beyond this sector and has been intertwined with the move of rural population to urban centers. This book explores urbanization of the fast-growing low-skill, low-wage rural population in India.

It focuses on broad physical planning of growing towns for the newly arrived populations taking into account emerging economic, social and technological developments and the likely patterns of urban growth. It explores planning issues across multiple sectors during periods of incubation as well as transition during growth. The driving goal of this exploration is the accommodation of rural migrants into an urban market economy, and their gradual adaptation to a substantially different social, economic and cultural life without dislocation or isolation.

Prof BC Chattopadhyay was on the faculty of the Department of Architecture and Regional Planning at the Indian Institute of Technology, Kharagpur from 1968 to 1995. He was the Department Head from 1971 to 1975 and established the first Indian doctoral research programs in Architecture, Regional Planning and City Planning. He also established first rural development research center in India at IIT Kharagpur and was its founding head. He has participated in several rural and urban planning efforts including the plan for Rajarhat township near Kolkata, the regional development plan for the Jalpaiguri district in West Bengal, rural development plans for Monghyr Sadar/Jamalpur in Bihar, the Mokokchun district in Nagaland and the first regional and city level plans for Asansol and Durgapur in West Bengal. He has been honored as a Distinguished Educationist by the Institute of Town Planners and by the Institute of Architects.

Save the World-ZWM by Jay Kay

Journal for Studies in Management and Planning, March 2015 Part-1 by jsmap
Reviews of "Growing Towns In India"
No Reviews Yet! Write the first one!
Please register or login to write a review.