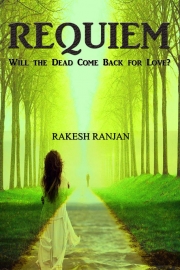 Requiem: Will the Dead Come Back for Love?

Requiem is about love although it doesn't look so until the latter half of the novel. It's the story of the unfulfilled love of the narrator. It's about Death, Love and Life. There are mistakes that a person makes but love often persists. And when it becomes so integral to your existence, you always tend to go back to it. It may haunt you in a sense but is often the sweetest memory that you carry. Requiem introduces Death as the beginning of a life beyond Life. Despite the vagaries it is associated with, Death can be a fascinating aspect of Life. It then moves to Love and describes how the two persons met and fell in love. And before love surmounts everything, one often loses to lust. Requiem details that journey of love. Requiem portrays Death and Love as the two continuous pursuits of man. While one fears the former, they always want the latter. Requiem shows how imagination can be a twisted reality. It shows the conflicts inside a human mind. The novel is written in a simple language and is an attempt to connect with the masses.

About the author(s)
Rakesh Ranjan is an MBA from Management Development Institute (India) and Edhec Business School (France). He now works in a technology consulting firm. He has stayed in different parts of India and travelled to places in Asia and Europe. He loves travelling and experiencing cultures. His experiences have helped him write. He is a keen observer of human behaviour. His interests are varied and he tries to find meanings in ordinary things. Surprisingly, he is a finance enthusiast and a writer at the same time. He has wanted to write for a long time. The idea of writing a novel came to him in the first year of engineering. And he decided to do it now, after almost eight years. His poem, ‘My Love, My Life’ was very popular in college. He has blogged a bit before and has also written some articles.
Book Details
ISBN:
9789351370307
Publisher:
Rakesh Ranjan
Number of Pages:
150
Availability: In Stock
Other Books in Religion & Spirituality, Romance

LIVE LIFE PROPERLY VOL-5 : AN OVERVIEW VOLUME OF THE COMPLETE SET. SUITABLE FOR PERSONS OF ALL AGES by DR.H.N.NAGARAJA

Essence of Inquiry: Vicharasangraham, A Commentary by Nome by Sri Ramana Maharshi
Reviews of "Requiem: Will the Dead Come Back for Love?"
No Reviews Yet! Write the first one!
Please register or login to write a review.