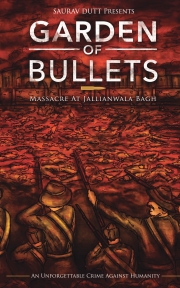 It has been a century since the massacre at Jallianwala Bagh, but India and especially the Punjab has not recovered from the mayhem and terror of that blood-soaked April in 1919. The British Empire never recovered either—the impact of those bullets fired for ten minutes at an unarmed, peaceful crowd directly impacted its remaining years in India. Yet, the true horror of the event itself has been forgotten, as also the explosive atmosphere in Punjab at the time.
What led to the brutality and horror of that day and how did it forever change India’s fight towards self determination and fight for independence? Why did the British seek to crush the meeting at the Jallianwala Bagh and impose martial law on Amritsar? What of the people who lived in the Punjab in 1919 whose lives were forever changed on 19 April 1919? Why did the people of Punjab, Hindus, Sikhs, Muslims, have to endure barbaric punishment in the wake of this atrocity, and why was news about the campaign of terror in the Punjab supressed from the rest of the world?
These are the questions fuelling this hard-hitting and uncompromising novel reconstructing that crucial day and the events that followed. Based on the reports of the Hunter Committee and the Indian National Congress, as well as other historical documents, Garden of Bullets: Massacre at Jallianwala Bagh provides a sharp analysis of the British Raj in Punjab at the time, General Dyer’s actions and their fallout—the official narrative and the Indian counter-narratives.

Based on years of research and startling new evidence, this is a masterpiece of narrative non fiction, as Saurav Dutt reveals a new take on the Amritsar Massacre that is utterly compelling, but also emotionally devastating.

SAURAV DUTT is an Indian author and columnist. He is also a human rights campaigner and political commentator for the IB Times, The Times of Israel, American Herald Tribune and The Bengal Chronicle. 'Garden of Bullets: Massacre at Jallianwala Bagh' was launched at the House of Lords in London, England on the centenary of the Jallianwala Bagh massacre and was featured in TIME magazine.

The History of Probability ( 1865) - Vol. 2 by Isaac Todhunter
Reviews of "Garden of Bullets: Massacre at Jallianwala Bagh"
No Reviews Yet! Write the first one!
Please register or login to write a review.