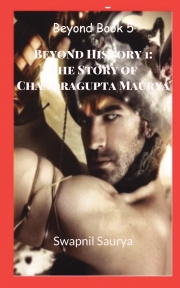 Beyond History 1:The Story of Chandragupta Maurya

Also Available From
Flipkart / Amazon.in
Description of "Beyond History 1:The Story of Chandragupta Maurya"

Chandragupta Maurya (340 BC - 298 BC) was the founder of the Mauryan Empire and the first emperor to unify India into one state. He ruled from 322 BC until his voluntary retirement and abdication in favour of his son Bindusara in 298 BC.

Chandragupta Maurya is a pivotal figure in the history of India. Prior to his consolidation of power, most of South Asia was ruled by small states, while the Nanda Dynasty dominated the Gangetic Plains. Chandragupta succeeded in conquering and subjugating almost the entire Indian subcontinent by the end of his reign. His empire extended from Bengal and Assam in the east, to Afghanistan and Balochistan, eastern and south-east Iran in the west, to Kashmir in the north, and to the Deccan Plateau in the south. It was the largest empire yet seen in Indian history.

Swapnil Saurya is a 23 years old author of 14 books. His battle with the cerebral palsy began as umbilical cord was disconnected from his mother. In spite of his ongoing battle with life, he stands out as an icon of inspiration for millions of children who are suffering from cerebral palsy and their family members. He hails from Madhubani, Bihar and currently lives in Goa with his parents. He completed B Sc and his favourite subject is computers. And he presently studies in Goa University with his favourite subject MCA. His writing career started at the age of ten with a few articles which were published in the newspaper. This book is a science ﬁction and he is also working on science ﬁction. He practices OSHO meditation techniques which help him overcome his disability and lead a happy and normal life.

Seven Attempts by Saionton Basu
Reviews of "Beyond History 1:The Story of Chandragupta Maurya"
No Reviews Yet! Write the first one!
Please register or login to write a review.