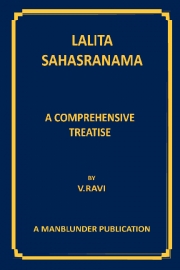 Lalitāmbikā is the embodiment of compassion as She is fondly addressed as Śrī Mātā. which means the mother of the universe. She is fondly worshipped through many means such as worshipping Śrī Cakra, meditating on Her through japa mantra-s such as Pañcadaśī and ṣodaśī, singing Her praise through various verses, etc. The important among the last one is Her most celebrated Sahasranāma, which was authored by Her very close attendants in Her presence and in Her place. Every name used in this Sahasranāma has got gross and subtle meaning. Sahasra means one thousand and nāma means name. Nāma not merely refers to names, but also Her forms and attributes. She engulfs the universe through Her delusionary influence called māyā. Śiva has given Her full authority for effectively administering the universe.
This edition of Sahasranāma contains detailed interpretation for each name with appropriate quotations from Veda-s, Saundarya Laharī, Bhagavad Gīta, Upaniṣads, etc in order to make the understanding better. The citations from Veda-s and scriptures go to prove the magnificence of Lalitā Sahasranāma. Every attempt has been made to make the interpretations as easy as possible and no effort was spared to go into the depth of each nāma. Each nāma is not only transliterated (International Alphabet of Sanskrit Transliteration - IAST), but also the original Sanskrit version of the nāma is also used, so that the original beauty of the nāma is not lost. A lot of additional informations have been provided captioned as ‘further reading’. Such informations are not only needed for better understanding of nāma-s, but they, in general, provide additional knowledge for those who pursue the path of spirituality.

This book is authored by V.Ravi. He shares his spiritual experience through detailed discussions on Self-realization, interpretation of Indian Scriptures, simplified guidance to kundalini meditation, explanation on mantras, etc. From the year 2000, he has devoted his entire time to writing. He has spent considerable time in studying Indian scriptures, particularly Advaita philosophy, which is the foundational aspect of Indian philosophy. He uses simple language to explain Sanskrit words, which become an integral part while understanding sacred Indian Scriptures.

An Organic Whole of All & Everything by Mohan Vaishnav

Saturn Transit Predictions 2017 - 2020 by KT Astrologer
Reviews of "LALITA SAHASRANAMA"
No Reviews Yet! Write the first one!
Please register or login to write a review.