We had the opportunity to chat with Salil Chaturvedi, author of love and longing in the anthropocene.

Salil Chaturvedi is the author of short fiction and poetry and dabbles in photography. His stories and poems have been published in various journals and anthologies. He loves creating haiku, haiga (a combination of a visual and a haiku) and haibun ( a short prose piece, combined with haiku), which have been published in international journals dedicated to the Japanese forms.  His poetry collection, In the Sanctuary of a Poem was published in 2017 and is available on Amazon. In 2019 he was conferred the Hindi Seva Samman by the Hindi Academy, New Delhi, for his collection of Hindi poems, Ya Ra La Va Sha Sa Ha. He lives in Chorao, Goa.

Pothi.com: Tell us about your writing process.

Salil Chaturvedi: It’s quite a messy and reiterative process. Once the first draft of something is down on paper, I tend to look at it from many angles, trying out different ways of saying it, different voices and viewpoints, so that I frequently end up with quite a few versions of a piece, complicating my life. But when one finds such joy in working with words it is a welcome complication. I can happily spend a day fussing over a single word in a poem, or a punctuation mark! The way things sound plays an important role, too. For some poems, their shape on the page becomes exceedingly important. But there are enough of those times when things happen in a more spontaneous manner and any fiddling would only spoil things.

Pothi.com: How did you develop an interest in haiku, haiga and haibun? Please tell your readers about how these forms of Japanese poetry differ from each other and which one is your favorite?

A haiku is a short poem, usually juxtaposing two images to find a leap of meaning, and in English, about 10-12 syllables long.
A haibun is a short prose piece, written imagistically and usually in the present tense, with a haiku attached, though there are other variations to it. A haiga is an image, traditionally a monochrome ink painting, with a haiku attached to it in such a way that they expand each other’s meaning.

I had known about haiku for a long time, but my serious engagement with the form began after reading Basho’s classic The Narrow Road to the Deep North. It’s a book I return to regularly. I honed my skills through reading haikus of the masters, the various online journals dedicated to Japanese forms and books. There are plenty of educational resources online, especially on the Modern Haiku website, such as essays that explore various dimensions of the form, its historic development and other finer points. Since I like taking pictures, haiga, where a haiku is juxtaposed with an image, was a natural progression.

Amongst the three, haiku remains my favourite form.

What I like most about it is how it hones your attentiveness to the world. If poetry can be imagined as a net made out of words, I think of haiku as a finely meshed net that is ideal for capturing the littlest of mundane things. As Basho said, for haiku the interest is not duck soup, but vegetable broth. For me, the single most important aspect of the haiku is the kigo (the season word) which is a nod to the larger world in which all the happenings take place. In that sense, Ecopoetics runs in the DNA of haiku. I am reminded of the feminist scholar and philosopher Donna Haraway who says: The biotic and abiotic powers of the Earth are the main story.

Overall, I can sum up my encounter with haiku thus:

thunder
inside a curled leaf
a cocoon shifts

Pothi.com: You write in Hindi and English- how different is it writing in different languages?

Salil Chaturvedi: That’s an interesting question. One doesn’t make a conscious choice, of course. The poems seem to choose a language of their own accord. I guess my Hindi roots are still alive and their tentacles seek out some vernacular nutrition. On rare occasions, I translate a poem from one language to another, but otherwise, it’s an automatic process. The Hindi poems seem to say things that I can’t possibly say in English because the idioms are so different. Taking the first few lines of a poem, Kuch Hai—

I wouldn’t know how to say it in English and maintain the same cadence!

I do write haiku in Hindi as well, just so your readers know that that’s possible. In fact, there are a few of them in the Hindi book Ya Ra La Va Sha Sa Ha available at Pothi.com.

Pothi.com: Tell us about how you arrived at the fascinating title: love and longing in the anthropocene.

Salil Chaturvedi: It just popped into the head! There are three sections in the book, and ‘love and longing in the anthropocene’ is the first section which brings together the body, love, techno-science, nature, refugees, wars, runaway capitalism, disappearing species…in short, everything that marks the consumptive and polluting Anthropocene era. The work was born from a dream in which I wrote a short poem, the only time I have written a poem in a dream. It was an erotic/love poem. I woke up and wrote it down immediately, and for about six months after that, I kept writing these poems to an imagined lover where the body (and the earth as an extension of the body) takes a central place. So, yes, it was a fascinating and intense process in which I seemed to be taken along for the ride. Later, I realized that the title forms a nice acronym — LALITA, meaning, pleasant, playful.

Pothi.com: How do you put a book of poems together- what is the glue that holds your poems in a certain order? Is the ordering of your poems planned or organic?

Salil Chaturvedi: So, this is how it works—I will struggle with the sequencing and arrangement of the poems for weeks, trying out many combinations. I will see myself as a reader and read through the work noticing how a poem on a page reacts with another on the facing page. I will also pay attention to the way the tone of the book develops, what moods are evoked. I will play with all this. It’s a thrilling sort of game. The poems will keep shifting and changing places and then, one day, will come together. Then I am ready to publish. After publication, I will find that I might have wanted to do it slightly differently. So, it goes! That doesn’t mean that all the thinking has been a waste, just that there is always scope for improvement.

Salil Chaturvedi: I think the best way to go about it is to first send poems to journals that accept poetry. There are a plethora of online journals these days. The advantage is that you get some feedback on your work from editors and readers. While it is easier to publish through self-publication options, including with Pothi, I feel that many people rush to publish their work. I have had a few aspiring poets who have sent me manuscripts, and my advice generally has been to take a little longer to publish, allowing the work to gestate and mature. I’m just passing on the advice that I have received from seniors.

Pothi.com: Tell us about your experience self-publishing with us.

Salil Chaturvedi: The process is easy and smooth. The staff is ultra-professional and accessible. The author dashboard is a great feature that lets you track your sales and royalties. But, one drawback of self-publishing remains marketing. While some writers are good at it, most that I know, including myself, would rather write than promote their work. But, that’s a whole different conversation. Also, self-publishing means that mainstream publications do not review your work and you have to work harder at developing your market and finding readers.

Pothi.com: Future projects you are excited about.

Salil Chaturvedi: Right now, I’m looking forward to bringing out a short story collection which is titled The Inexact Room. It should be ready by March-April, if all goes well. Apart from that, I have a vague idea for a collection of haibun.

Thanks for the informative session, Salil! Wish you all the best for your writing!

There is a pandemic that is raging around us and a lot of things that we have taken for granted have now been postponed indefinitely. So a haiku challenge at Pothi.com felt like the perfect way to alleviate the mood.

A haiku is a seventeen syllable poem usually about nature. The Japanese poet Basho was a famed exponent of this form of poetry. This is a translated haiku by him:

In Kyoto,
hearing the cuckoo,
I long for Kyoto.

When you write a haiku in English, you follow the #fivesevenfive structure which means five syllables in the first line, seven in the second and five in the third line. A syllable is a unit of sound, e.g., the word haiku has two syllables.

What the Pothidotcomers did was frame a haiku each after a small session with me. We then decided to extend the haiku challenge to twitterverse. What started as a one day enterprise turned into a three day haikuthon!

We received over forty submissions and decided to frame each haiku in digitally beautiful picture frames. We got poems about the corona virus, the beauty of nature, summer holidays, folktales and the daily routine of living in pre-Covid times. People from all walks of life emailed us- first time writers, established writers, students, bloggers, teachers, friends….we were simply overwhelmed!

Here are some gems. 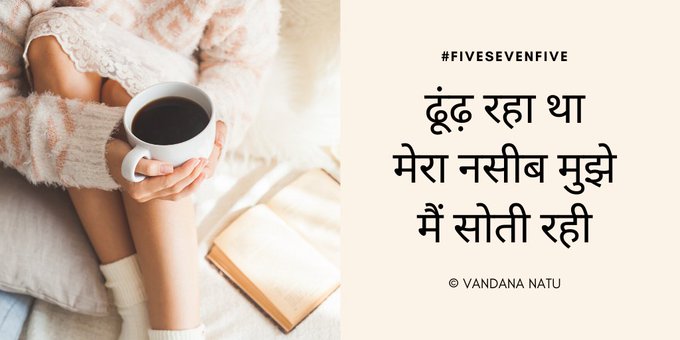 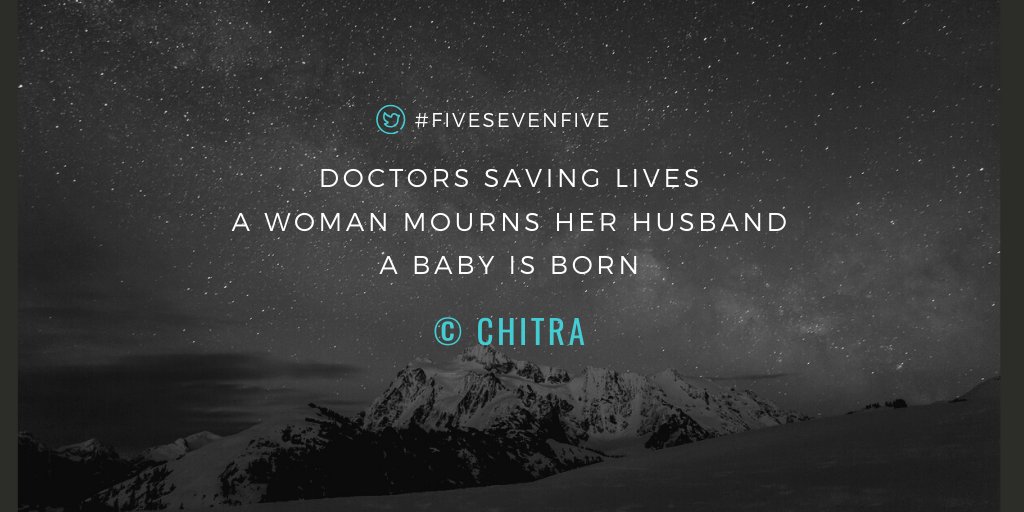 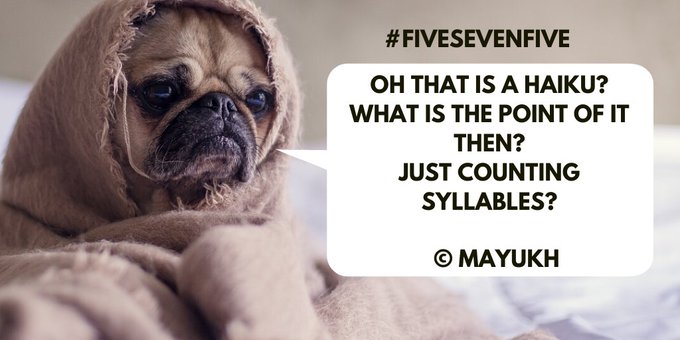 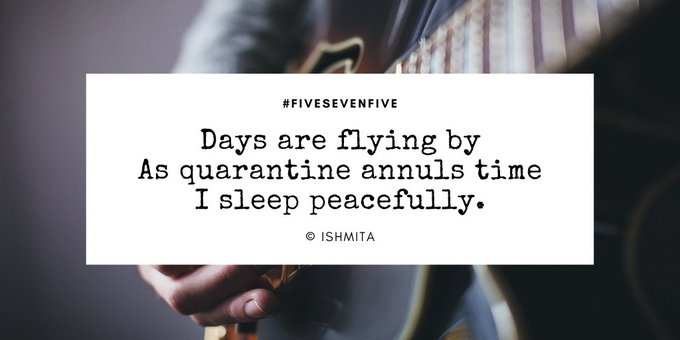 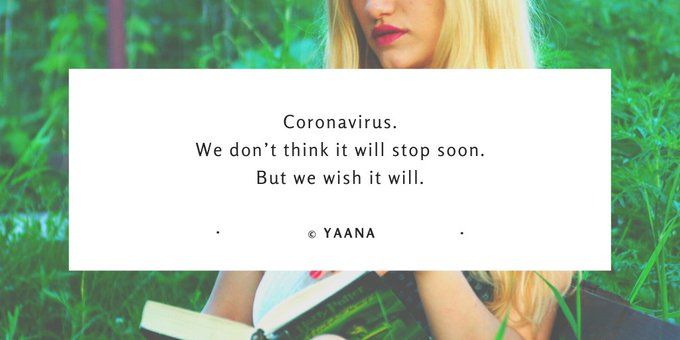 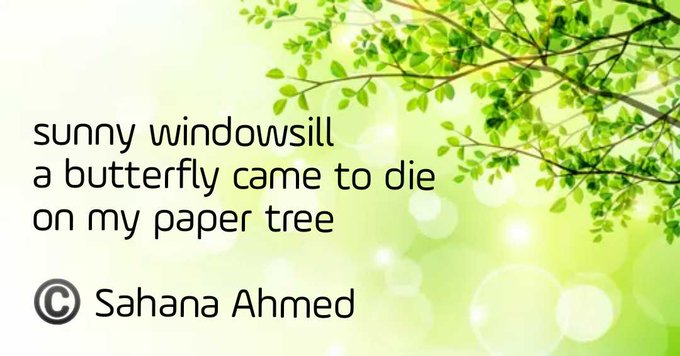 For more of these you can check out our twitter moment. Have you ever tried writing haiku and has it lifted your spirits?