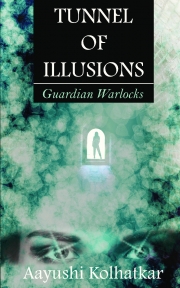 Naomi Brown thought that she was a normal girl, until unusual things begin to happen. She hears strange voices warning her during a treasure hunt at her friend Alexandra’s party, beginning a discovery into her secret Warlock lineage...

She gradually uncovers her hidden powers while seemingly behaving like any normal teenager. But when Alex is kidnapped by the evil Loki, Naomi rises to the challenge to find her friend and destroy Loki.

Alex contacts Naomi through a dream. Naomi now must cross the Tunnel of Illusions to get back her friend. After a series of death defying escapades, Naomi and her three friends successfully manage to get Alex back and destroy the evil Loki.

After their brave rescue, Naomi, Josh, Brian and Alex are honored with the title of Guardian Warlocks by the powerful High Warlocks, sworn to look after the Samartian Jewel, the key to the Warlocks’ magical powers.

While this marks the end of one adventure, it also marks the beginning of another…

Buy both at Pothi.com

The Labyrinth Of Love by Shaniah Quadras

The Linchpin by Neeraj Ashok

The Best Short Stories of 1921 by Multiple Contributors
Reviews of "Tunnel of Illusions"
No Reviews Yet! Write the first one!
Please register or login to write a review.