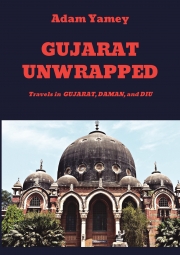 Travels in Gujarat, Daman, and Diu

This fascinating book describes the experiences and adventures of an Englishman and his Gujarati wife on their first visit to Gujarat. This part of India was the birthplace of notable Indians such as Narsinh Mehta, Dayanand Saraswati, Shyamji Krishnavarma, Mahatma Gandhi, Dadabhai Naoroji, Vallabhai Patel, Morarji Desai, and Narendra Modi. Gujarat is relatively less visited by both Indians and foreigners than other parts of India (such as Goa, Kerala, Rajasthan, and the ‘Golden Triangle’).
Adam Yamey’s travelogue not only unwraps the delights of the State of Gujarat but also those of the former Portuguese colonies, Daman and Diu.
During their journey the author and his wife, who is fluent in Gujarati, met and spoke with many people ranging from autorickshaw drivers to members of a former royal family. From them, they learnt much about Gujarat’s past present, and future.
Although not a guidebook to Gujarat, this richly illustrated book will introduce readers to much that will find new and exciting.

Adam Yamey is the author of several books, including: “Ideas, Bombs, and Bullets” (about Indian freedom fighters in early 20th century London), “Albania on my Mind”, “From Albania to Sicily, Exodus to Africa”, “Rediscovering Albania”, “Aliwal”, “City on the Hooghly”, “Bangalore Revealed”, and “Imprisoned in India”.

Born in 1952 in London, he attended Highgate School, and then University College London. After a doctorate in physiology, he qualified as a dental surgeon. After 35 years in general dental practice in Kent and London, he retired in September 2017. He is married to a lady born in India.

LEGENDS OF THE GODS by SIR WALLIS BUDGE

Himalayas: Through Heaven and Hell in the Hills by Praveen Venkiteswara Annu

गांधी युग पुराण - स्कंध १० by डॉ. सेठ गोविन्ददास
Reviews of "GUJARAT UNWRAPPED"
No Reviews Yet! Write the first one!
Please register or login to write a review.