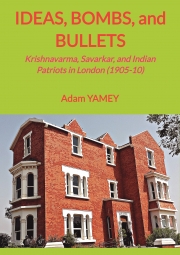 Inside a house on a quiet tree-lined residential street in north London’s Highgate, a young Indian held a revolver in one hand and repeated a solemn oath promising to give liberating India from the British greater importance than his own life…
.... “IDEAS, BOMBS, and BULLETS” by Adam Yamey explores the relatively unknown history of an adventurous group of Indian patriots, who congregated at India House in London’s Highgate between 1905 and 1910. They hoped to hasten the end of British imperial rule in India. India House was regarded as a ‘centre of sedition’ by the press and police. The people who met there were considered terrorists by the British and freedom fighters by the Indians. In addition to exploring the events leading to the foundation of India House, this volume relates the true stories of these Indian revolutionaries in Edwardian London: adventures which rival tales of derring-do written by authors like John Buchan.

Adam YAMEY is a retired dentist and an active author. He is married to an Indian, and has been visiting India
frequently since 1994.

He studied for five years at Highgate Schoolin north London before entering University College London. There, he was awarded a doctorate in physiology, and then qualified as a dental surgeon. After 35 years practising dentistry, he retired.

Adam has published books on diverse subjects including, South Africa, the Balkans, India, and Sicily. His most recent book is
about travelling in Gujarat.

Govinddas Granthawali - 15 by Seth Govinddas
Reviews of "IDEAS, BOMBS, AND BULLETS"
No Reviews Yet! Write the first one!
Please register or login to write a review.