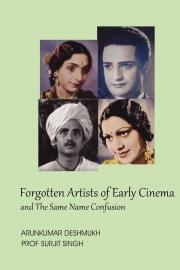 Forgotten Artists of Early Cinema and The Same Name Confusion

Tens of thousands of artists have contributed to Hindi cinema since 1931. Barring a few famous ones, other are long forgotten and are destined for obscurity. By sheer determination the authors have obtained information on more than 30 such artists, eg Khalil, Baakre, Baby Akhtar and Latika.

There are scores of others with similar names. Their biographies and filmographies are often mixed up even in well-known books and popular websites. By deep research the authors have distinguished between more than 25 such cases, eg Shyams, Rajkumars, Zubeidas and Shashi Kapoors.

The book is illustrated by more than 60 rare and not-before-seen pictures of these long forgotten artists.

Arunkumar Deshmukh has been seeing old films and recording their information in notebooks since he was in his 20s. From the early 40s to the end of the 60s, he saw films in various languages. He started writing on old films, its people and songs from 2012 and has over 700 articles, over 650 Film reviews and hundreds of valuable informative comments on Facebook, various sites and blogs, to his credit. He is a retired Pharmaceutical Marketing Expert and is on the Board of Directors of two companies.

Professor Surjit Singh, a diehard movie fanatic, period. He is a retired Theoretical Physicist. He has been watching Hindi movies since 1952, has been collecting Hindi songs, movies and magazines since 1969, and has been writing about these things since 1996. He has had a website since 1999, http://hindi-movies-songs.com/joomla/ He has published two book in Physics and four on the forgotten and unsung artists of the 30s and 40s