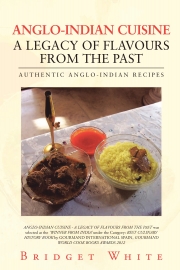 ANGLO-INDIAN CUISINE - A LEGACY OF FLAVOURS FROM THE PAST

ANGLO-INDIAN CUISINE – A LEGACY OF FLAVOURS FROM THE PAST is a comprehensive and unique collection of recipes of well loved Anglo-Indian dishes such as Yellow Coconut Rice and Mince Ball Curry (Bad Word Curry), Pepper Water, Mulligatawny Soup, Pepper Steaks, Beef Country Captain, Ding Ding, Stews, Duck Buffat, Almorth, Brinjal Pickle etc, that are all time popular Anglo-Indian favourites and will take one on an exotic nostalgic journey to Culinary Paradise. (It is a revised consolidated version of The Best of Anglo-Indian Cuisine -A Legacy and Flavours of the Past. Lots of old Colonial recipes added in this addition)
ANGLO-INDIAN CUISINE – A LEGACY OF FLAVOURS FROM THE PAST was selected as ‘Winner from India’ under the Category: ‘BEST CULINARY HISTORY BOOK’ (COUNTRIES) by GOURMAND INTERNATIONAL SPAIN, GOURMAND WORLD COOK BOOKS AWARDS 2012

My name is Bridget White-Kumar. I am a Cookery Book Author and Independent Food Consultant & Trainer in Colonial Anglo-Indian Cuisine at Bangalore. I have authored 7 Recipe books on Anglo-Indian Cuisine. My area of expertise is in Colonial Anglo-Indian Food and I have gone through a lot of effort in reviving the old forgotten dishes of the Colonial British Raj Era. My Recipe books are a means of preserving for posterity, the very authentic tastes and flavours of Colonial ‘Anglo’ India, besides recording for future generations, the unique heritage of the pioneers of Anglo-Indian Cuisine. One of my Recipe books ANGLO-INDIAN CUISINE – A LEGACY OF FLAVOURS FROM THE PAST was selected as ‘Winner from India’ under the Category: ‘BEST CULINARY HISTORY BOOK’ (COUNTRIES) by GOURMAND INTERNATIONAL SPAIN, GOURMAND WORLD COOK BOOKS AWARDS 2012

I'm an Independent Freelance Consultant on Colonial Anglo-Indian Food Related matters. I've assisted many Restaurants, Hotels and Clubs in Bangalore and elsewhere with my knowledge of Colonial Anglo-Indian Food besides helping them to revamp and reinvent their Menus by introducing new dishes which are a combination of both Continental and Anglo-Indian. Many of them are now following the Recipes and guidance given by me and the dishes are enjoyed by both Indian and Foreign Guests.

I have been conducting Cooking Training Workshops on Colonial Anglo-Indian Cuisine for Chefs and cooks at various 5 Star Hotels and Luxury Resorts all over the country during the last 8 years, such as at the Oberoi Hotel Mumbai, Sujan Luxury Rajmahal Palace Jaipur and the Sujan Luxury Sher Bagh Camp in Ranthambore Rajasthan, The Taj Conemara Chennai, The Taj West End Bangalore, Vivanta by Taj Whitefield Bangalore, Bow Barracks Bangalore, The Cochrane Place in Kurseong Darjeeling, The Ivy Unwind Resort Bangalore etc to name a few and also at prestigious Clubs such as The Bangalore Club, The Catholic Club Bangalore, etc., besides conducting Cooking Demos and Food festivals at various places all over India such as Clubs, Restaurants, Women's Groups, Corporate Offices. Etc.

The high light of my Training Programme is that it is an Interactive and Hands on programme where the participants are involved in every step of the preparation of the dish. They are taught to standardise the portions, the art of presenting the old Colonial Dishes, the right accompaniments and the history behind each dish.

I also conduct cooking classes for small groups / one-on-one sessions at my residence on Colonial Anglo Indian cuisine - both Non-Vegetarian and Vegetarian. The repertoire covers a wide selection of Colonial dishes such as Curries, Side Dishes, Rice Dishes, Festive and Christmas Sweets, Tea Time Snacks and Savouries, Puddings and Custards, Baked Dishes and Casseroles. Besides demonstrating the dishes, I also talk on the history and evolution of Anglo-Indian Cuisine and how each dish got its special moniker

I am always ready to share and talk about Recipes and Food.

Yoga Therapy: Diabetes and its prevention by Prashant Kumar

The 3 Big Cs: Cancer, Causes and Cures by S Verma

nice book .. perfect and easy knowledge providing the customers. keep writing such good books and helping people in the same way so that they benefit.. god bless you