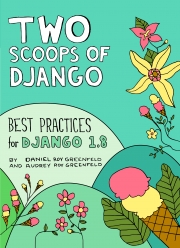 Two Scoops of Django: Best Practices For Django 1.8 is chock-full of even more material that will help you with your Django projects.We'll introduce you to various tips, tricks, patterns, code snippets, and techniques that we've picked up over the years.We have put thousands of hours into the third edition of the book, writing and revising its material to include significant improvements and new material based on feedback from previous editions.Table of Contents

What is everyone saying about Two Scoops of Django?

Daniel and Audrey Roy Greenfeld are best known for their open-source community leadership work on the following projects:

Advanced Siebel Guide by MD AZIZUDDIN AAMER
Reviews of "Two Scoops of Django: Best Practices for Django 1.8"
No Reviews Yet! Write the first one!
Please register or login to write a review.