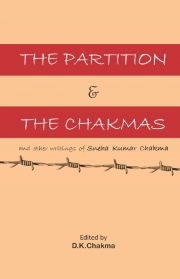 THE PARTITION AND THE CHAKMAS

and other writings of Sneha Kumar Chakma

The true story of how mainstream Chakmas were turned away from their own land due to the Partition and the unjust situations and people they faced….Betrayed by the Radcliffe Award which allotted The Chittagong Hill Tracts to the then Pakistan….A story of a people, wanting to unite with India, but possible only as refugees……losing everything to the unjust situation of PARTITION…..documented by Sneha Kumar Chakma, an unsung hero and forgotten leader of the Chakmas…….

SNEHA KUMAR CHAKMA, a forgotten leader of the Chakmas, sacrificed his life fighting the injustice meted out to the people of Chittagong Hill Tracts during the Partition of India by the Radcliffe Award of 1947 when the CHT was unjustly allotted to Pakistan even when the people of CHT wanted to unite with INDIA….

D.K. CHAKMA
As the editor of this book, D.K.Chakma had tried to give shape of a book to the collated writings of his illustrious father, Shri Sneha Kumar Chakma. In publishing this book, he is not only fulfilling his long time wish of bringing out a book of his father’s ideals, thoughts and writings, but also highlighting the historical background of the untold sufferings of Chakmas after the Partition.
After graduating from the Calcutta University with English Honours in 1976, D.K.Chakma had worked in several capacities, including that of Legislative Secretary in Chakma District Council, Mizoram, as an officer in Bank and in Ministry of Defence before joining the Indian Railway Traffic Service (Civil Services) in 1987. After taking voluntary retirement from IRTS in 2010, he is now working as a Member (Technical) of Railway Claims Tribunal (Ex.Officio Special Secretary to the Govt of India) and is currently posted in Chennai.

The Partition and The Chakmas by Sneha Kumar Chakma

“If I tell you all that my people have faced, blood, and not tears will flow out of my eyes... Years of genocide have desensitized us.”

The book, ‘The Partition and The Chakmas’ is an unedited compilation of the written work of the unsung hero of Chittagong Hill Tracts (CHT) brought into print by his son, Deepak Kumar Chakma. It is a semi-biographical narrative of his inspiring life. His sincere efforts in protecting the interests of CHT during and after the Indian partition have been portrayed well, very much obvious in the power of his pen which he kept using till the very end of his life.

The author of this book, Sneha Kumar Chakma spent his entire lifetime fighting for the cause of the Chakma freedom movement. Mahatma Gandhi, Pandit Nehru, Sardar Patel and most of the well known freedom fighters and Indian political leaders of India were aware of this terrible ‘Himalayan blunder’ but did nothing. The Radcliffe award was put into action discreetly and the CHT was allocated to Pakistan without even informing the Chakmas. Maybe, Sardar Vallabhai Patel, Subash Chandra Bose and even Indira Gandhi were sympathetic towards the movement but all their sympathy and S.K.Chakma’s efforts went in vain because by the time Rajiv Gandhi came to the political stem, the Chakma issue had become a lost cause.

India was finally independent, free of enslaving British rule. All over the country people rejoiced. The Chakma tribe was one such set of people – an organized lot, loyal and patriotic. They raised the Indian tricolour on the 15th of August with a lot of joy and pride at their district headquarters at Rangamati. In fact the Indian flag stayed flying for six days from15th August to 20th August 1947. All of a sudden, on 21st August the Pakistani flag had replaced the Indian flag and the jawans of the Baluch Army of Pakistan had taken over everywhere.

As of today, the people from the Chittagong Hill Tracts are the worst affected victims of partition. They do not want to be in an alien country nor can they live as legal citizens in their own country (India) where they are now treated as refugees. Terrible injustice for the Eight Sister of the North East , a 97% non-Muslim area which had no desire whatsoever to be thrown into Pakistan nor was there any proper justification for this to happen considering the fact that the area and its people had no history of trouble-making ever.

It is alleged that innumerable Buddhist Chakmas were forcibly converted to Islam. Allegedly, numerous gang rapes were also committed and more than 10,000 Chakmas were murdered. And finally, encroachment of their land also commenced. The Shanti Bahini was formed in the year 1973 to forestall this encroachment but the brave resistance of the Chakmas died a pitiable death.

Many people born after India gained independence are indifferently unaware of the part played by the Chakmas/ CHT in the freedom struggle.

This book makes a valiant effort at bringing to the forefront a part of the Indian struggle that has been pushed under the carpet of powerful red tapism and insensitive governments of India for decades. The articles, confidential documents and letters, photographs incorporated in the book make it a valuable piece of history that would definitely grace the book shelf of readers interested in the truthful picture of a brave sect of people lost to the world all by a ruthless stroke of a pen held by an indifferent Britisher called Radcliffe!