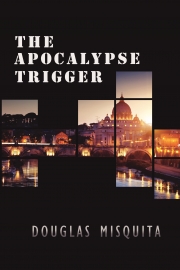 AD 42: A drunken wager over an imminent natural disaster gives rise to the Vesuvius Group. Over the centuries, their power and wealth have flourished. Today, they influence the upper echelons of World Order. The member families continue the tradition of macabre, and arrogant wagers.

1947: A ship in the Malacca Straits broadcasts a distress signal. When help arrives, her crew is discovered dead... because somebody wanted to acquire the ship's cargo.

A violent confrontation pits FEG's chief of security, Luc Fortesque against one of the victims' father, Billy Bradford... and exposes FEG to an international investigation.

In a bid to return to his employer's good graces, Luc Fortesque agrees to 'acquire' weapons technology from a Chinese rival. Unwittingly, he lends himself to the final act of a grand scheme of revenge that dates to the end of World War II.

In the aftermath of a devastating attack on the world's grandest luxury hotel, Sebastian Laporte is on the Most Wanted List of every law enforcement agency in the world. But his actions have made him a prime candidate to execute the ultimate suicide mission.

Amid all this, Billy Bradford and Luc Fortesque must put aside their personal war and become the men they once were to prevent an... apocalypse.

Douglas Misquita is an action-adventure thriller writer from Mumbai, India. His books have been enthusiastically received by fans of the action-adventure thriller genres. The Immortality Trigger won the Literary Titan Silver Award in 2017. He has also penned a travelogue, Impressions of Egypt and an action short, Know Thy Enemy – the prelude to The Apocalypse Trigger – available as a free download from his website.

Let It Bleed by Nicole I-Nesca

The Folly of Eustace by Robert Smythe Hichens