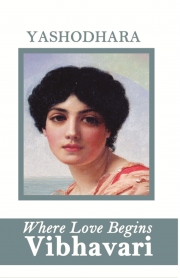 The plot of the story is penned with deep emotion of love. It is imminent that the world changes every moment. The actress connected with many characters searching for that perfect love. She realized at the dusk of life WHAT THAT REAL LOVE IS.
Transformation is life. Though every human-being has its own personality and nature, yet there is some specialty in Vibhavari's life.

Dr. Jashodhara Purkayastha (YASHODHARA), an educator has taught for 25 years As an educational psychology lecturer and counsellor, she handled many sensitive cases with empathy. Another book "You Can Know your Psyche" penned by her was acclaimed as great non-fiction book delving into the lives of people.

The Great Dome on Mercury by Arthur L. Zagat

The beautiful, soft cover of the book was an instant draw for me, when it arrived at my door step. The mesmerizing face of the cover, and the light pastel colours were soothing to my mind. Naturally, I read the book at almost one sitting. The absorbing content can be clearly seen at three levels.

The first is direct. Vibhavari, a girl from a poor family in Rishikesh, is married off early at sixteen to a man from Dubai. The marriage turns abusive and the young Vibhavari is beaten and sexually abused by husband and brother-in-law. Innocent, shy and beautiful Vibhavati, bears this brunt, including bearing two sons from this marriage. At last, finding a way to escape from this torture, she is back to her own country, the two boys being placed in a boarding school in Panchgani, near Pune, Maharashtra.

After a marriage in which she literally undergoes marital rape, Vibhavari, is however, still looking for love, as she quite understands that there is a distinction between love and sex. She is looking for love, when, on her visit to see her sons, she meets a man, with whom she gets physically and emotionally close. However, when the question of marriage is brought before the man, he quickly retreats, saying the togetherness was more for mutual sexual pleasure and not for making commitment. Vibhavari is shocked and decides to stop meeting him.

Shortly after she meets a man from her own building residence, who is bethropped to a lady, but does carry on an illicit sexual relationship with Vibhavari. This too meets the same fate – there will be no marriage in future. Vibhavari is depressed, lonely and still searching for that love, when, at the Yoga class she finally meets the man, older and wiser, with whom she is married again, and learns and travels a lot. Vibhavari, however, it seems is unlucky in love, as this last, treasure trove of love, is snatched away from her by death. Vibhavari is left alone, but this time, many things change in her life and lead her to an amazing end, coming the full circle, of life and love.

But, there is a deeper second level to this book and I would like to dwell on that. The perfect abuse story, of marital rape, physical abuse and mental torture would have lead to two consequences – one, Vibhavari would have shied away from society and become a recluse, but in fact, the opposite happens. She celebrates her body, her ability to find sexual gratification and to be engaged sexually with men she isa attracted to, showing the reader that there are two options available to the abused human; they can chose to become a recluse or they can embrace the world with more desire. Vibhavari chose the latter, but was still unfulfilled, because, she was really looking for love.

The third level of the book and story is complex and uplifting. Desire, deviance and divinity make the third level the most exciting, for the reader with a ‘third eye’ that goes beyond the mundane. It is Freudian in nature – desire is inherent in man. Id,Ego, Superego. But where Freud stops, Indian spiritual therapy begins and so, Vibhabavi, the simple girl from Rishikesh, returns home, physhically, metaphorically and spiritually, back to where she came from and the reader now must travel with her, to Rishikesh to see what love finally is and where it finds its ultimate source and resting place.

Where Love Begins Vibhavari, is a powerful story at all levels, for love, is a primal search that is the be all and end all in our lives, until we know better.