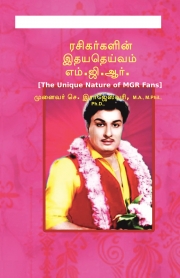 MGR, the all-time numero uno Star of Tamil cinema and three time Chief Minister of the state of Tamil Nadu, had been the Darling of the masses, till he breathed his last and beyond, for decades.

He lived forever in the hearts of millions of his fans due not only to his charisma but also for the message he delivered to his fans. So, it's worth exploring, decades after he has passed, to dissect and make sense of the phenomena called "MGR" or "MG Ramachandran".

Dr Rajeswari Chellaiah Ph.D. in translation studies has translated numerous literary works from English to Tamil and Tamil to English. She is best known for her reminiscence of MGR, the all-time numero uno star of Tamil cinema, through her research and literary aptitude and ability to bring events of yore back to life in words. This book recounts the events from the fans' side that led to the creation of the phenomena called MGR.

Unafraid by Niyati Tamaskar
Reviews of "ரசிகர்களின் இதய தெய்வம் எம்.ஜி.ஆர். (The Unique Nature of MGR Fans)"
No Reviews Yet! Write the first one!
Please register or login to write a review.