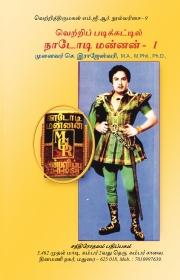 "Vetri Padikkattil Nadodi Mannan - 1" focuses exclusively on the build up of events that led to the making of the evergreen hit "Nadodi Mannan", its content, making and behind the scenes events.

Nadodi Mannan was a remarkable film that laid the foundation for MGR's ascent in his political career making him the numero uno political personality that made him the three time Chief Minister of the State Tamil Nadu.

This book sheds light on how the events that led to the making of and the film Nadodi Mannan itself made MGR a numero uno star and later the most successful politician in the history of Tamil Nadu.

Dr Rajeswari Chellaiah M.A., M. Phil., Ph. D. in translation studies has translated numerous books from English to Tamil and vice-versa. She is best known for her works on the matinee idol MGR on whom she has written tens of books on the various aspects of what led to MGR's stardom and ascent as a political leader and three-time Chief Minister of the state of Tamil Nadu, India.

She has authored "Vetri Padikkattil Nadodi Mannan - 1" to focus on the events that led to the making and the Brobdingnagian success of the film "Nadodi Mannan". The film ensured that MGR became politically relevant as a force to reckon with in politics.

So, "Vetri Padikkattil Nadodi Mannan - 1" is a must read for those who are interested in learning both the internal and external workings of such huge, fame, glory and immeasurable success of a once-in-a-lifetime phenomenon called MGR or MG Ramachandran.

Me And My Universe : A Conversation by S T Lakshmikumar