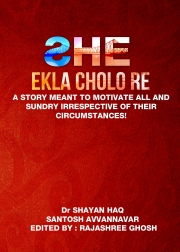 She : Ekla Cholo Re

Set in the backdrop of 1990 Calcutta, She is a story about finding one’s own identity in spite of all odds. The story spins around the life of Kusum, a brave heart whose identity is often untitled and blurred; it does not belong anywhere, definitely not under the ‘he’ or ‘she’ bracket, thanks to our social conditioning. Will she be successful in her mission? Find out in She, an utterly absorbing read that derives inspiration from Tagore’s “Ekla Cholo Re” song, which urges everyone to move on despite the fear of abandonment from others.

"She is one of the finest book to read" - Sujeeth Kumar, Project Manager, MNC Bengaluru

Mr P V Ramana, National Award Nominee and Scientist says "It is good have sympathy on cows and dogs, but better to have sympathy on our own species first. Mankind has so many sections of people who deserve much more attention and sympathy than what they get now. This novel is an attempt to draw our attention on one such set of people. It is not easy to run a novel with just two characters mainly and still succeed in its aim. The authors have very nicely managed this without loosing the grip on the readers. It is our social responsibility to read such books to know the unknown feelings of our own mankind."

Dr. Shayan Haq: Shayan is a medical doctor and cosmetologist by profession working at Bijapur, Karnataka. He is born at Gaya, Bihar and spent his quality time at West Bengal and Bihar before he moved for higher education. In his free time he loves to drive,
read, watch and discuss on movies, and a gadget freak.

Santosh Avvannavar: Santosh started his career as a consultant and Soft Skills Trainer. After his college education from NITK, Surathkal, he worked as a researcher at University of Eindhoven, University of Twente, and Indian Institute of Science, Bangalore. He was also the Placement President while working at IISC, Bangalore. He has over twenty-five publications of mostly research documents in national and international journals. He has also authored sixteen conference papers and regularly writes articles for a national and worldwide daily paper. He also works as an advisor for different organisations.

He also dabbles in fiction writing and is the author of Adhuri Prem Kahaniya; Dear Wife, Your Husband is not a Superhero, Second Heart and Get a Job WITHOUT an Interview; Be A B.A.; Surrogate Author; Title is Untitled; Black, Grey and White; The Departing Point; God’s Table and Umbilical Cord.

He likes to devote his personal time in writing for a website, namely the Amrita Foundation for HRD (www.amritafoundation.wordpress.com). He has conducted seminars and training sessions for more than 45,000 people in India and abroad over the last seven years.

Sharing Your Work in Open Access by Sridhar Gutam

Debate by Shubhankar Paul
Reviews of "She : Ekla Cholo Re"
No Reviews Yet! Write the first one!
Please register or login to write a review.