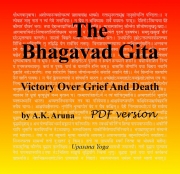 The Bhagavad Gita, as PDF and ePub (eBook)

Victory Over Grief and Death

The Bhagavad Gita is intended for repeated reading. Its teaching is very subtle and integrates the core of oneself into the vastness of this universe of experience. Being transformative in re-envisioning oneself and the world, more depth and interconnectedness can be discovered with each repeated reading.

This special format of the English translation of the Bhagavad Gita presents a way to quickly read the intended meanings of the entire text in three or four sittings. This is facilitated in part by removing the Devanagari of the text and any word-for-word meanings. Those are more than amply supplied by referring to the author’s Aruna Sanskrit Series in which the Bhagavad Gita is thoroughly analyzed down to the grammar of the verses and the roots of the words employed.

The Sanskrit language condensed verse formation requires an expert elaboration that is succinct enough to not drag out the reading of the text, missing the big, integrated picture for the minutia. This is uniquely done here by employing a bold font to distinguish the original words of the Bhagavad Gita from the embedded introductions and explanations in normal font.

Brief introductions are given to the entire Bhagavad Gita and to each chapter. These set up the following teaching and connect the teaching to what has been said before and what will be said later. This facilitates a quick integrated understanding of the teaching as you read.

Additionally, a unique index is provided to locate the important terms, concepts, and topics. For some reason many Indian authors give no index in their publications of the Bhagavad Gita. The uniqueness here is that the index is not to page numbers, but rather to chapter.verse numbers. This allows the index here to be applicable and very useful to any other translation of the Bhagavad Gita that you have relied upon but lacked an index.

A.K. Aruna started his studies in Advaita Vedanta and the Sanskrit language in 1976 at an intensive three-year program in a traditional gurukulam, outside Bombay, India, under Shri Pujya Swami Dayananda Saraswati, the most renowned Sanskrit and Advaita Vedanta scholar of the past century. Stepping outside his academic background in Western philosophy, Aruna immersed himself in the deepest, oldest spiritual tradition in the world. This detailed study opened his eyes. In this ancient teaching, Aruna found a complete merging of the intellect and heart. From that point on, he dedicated his life to the inclusive vision of Vedanta.

Returning to his native United States, Aruna earned a master’s degree in South Asian languages and literature from the University of Washington. Aruna later studied computer languages, becoming a programmer and manager of information technology in San Diego, California. Retiring to India in 2000, Aruna dedicated himself to studies in Advaita Vedanta and the Sanskrit Language. He created a set of tools for those students interested in a thorough study of Sanskrit to better understand the Bhagavad Gita.

Aruna has lived and studied in a traditional teaching gurukulam for over nine years in India and two years in the U.S. Wishing to help yoga students ground the traditional purpose of yoga in the revered scriptures of India, Aruna releases Patanjali Yoga Sutras: Translation and Commentary in the Light of Vedanta Scripture. This presents the yoga discipline as its practitioners in the ancient scriptures understood and practiced. There is also a translation only booklet of these sutras, Patanjali Yoga Sutras: A Translation in the Light of Vedanta Scripture, useful for classroom introductions and repeated readings of this enlightening work.

Anthology of the Sanyas Upanishads: Part 2 by Ajai Kumar Chhawchharia

आप्तवाणी-१३ (पूर्वार्ध) by Dada Bhagwan
Reviews of "The Bhagavad Gita, as PDF and ePub (eBook)"
No Reviews Yet! Write the first one!
Please register or login to write a review.