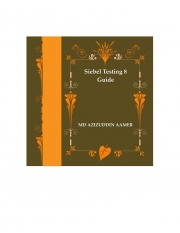 This book covers Component , Product , Operating Testing with respect to Siebel. It also covers the Testing life cycle. It covers both White Box as well as Black Box Testing. This also covers Unit Testing ( UT ) , Integration Testing (IT ) as well User Acceptance Testing ( UAT ).It covers entry and exit criteria for all testing covered as well as the deliverables.

It has a Sample full Regression Siebel Test plan. It has a comprehensive Glossary of Testing Terms & Terminology. It also covers Siebel Testing Best Practices.

• It covers the following new features in the Siebel 8.0 UI

Md Azizuddin Aamer is an MBA currently working as a Project Manager for a large MNC.

He got 8 + Years of Siebel CRM Experience. He has worked on all versions of Siebel ranging from Siebel 5.5 to Siebel 8.1.

Programs in PHP by Shubhankar Paul

COMPUTER AWARENESS SECTION WITH OBJECTIVE QUESTIONS FOR ALL BANK EXAMS by keerthana vinodhkumar
Reviews of "Siebel Testing 8 Guide (eBook)"
No Reviews Yet! Write the first one!
Please register or login to write a review.