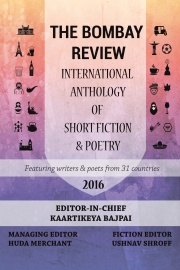 An international anthology featuring writers and poets from 31 countries. With a diverse set of pieces, the anthology doesn't come under any particular theme or genre, and is comprised of emerging and new voices primarily, as well as established names. This is the second print anthology of The Bombay Review, an online bi-monthly literary magazine based out of New York and Mumbai. It has a readership base in more than 120 countries. Apart from publishing The Bombay Review conducts free literary events across the world.

Kaartikeya Bajpai, 21, a JN Tata and Sir Dorabji Tata Scholar and journalism graduate, was first published in Chandamama when he was nine and his work has since appeared in Tehelka, Helter Skelter, Muse India, Reading Hour, Sahitya Academy’s Indian Literature Journal, Spark Magazine, Roots and Meanderings Anthology, Significant Anthology, Everyman’s Science among others. He lives in New York, and is completing his masters in Creative Writing. He recently gave his first TEDx talk at IIIT, Allahabad, on: ‘How we found a way to run an international literary magazine for free’ in January 2016, followed by another TEDx talk at SRM Chennai in March 2016. In the same year, he was one of the awardees of the ‘25 under 25 Change Makers in India’ award by Campus Diaries, in the field of writing. Kaartikeya also got selected as a Global Leader for a ten day leadership program for youth, which held in Skopje, Republic of Macedonia, in August 2016.

Huda Merchant is an Advertising graduate from Symbiosis Center for Media & Communication, Pune. She first started freelancing as a features writer for The Saudi Gazette when she was 15 and ever since, the field of communication has been her forte. She has worked as a copywriter and social media marketer for various organizations and with social enterprises like Young Initiative Group Consult and Tashkeil in Jeddah. She was also the Event Coordinator at the Saudi Creative Weeks: Media & Advertising in 2015 . She is currently the founder and organizer of Geekfest Pune in India and Jeddah Reads, a project based in Saudi Arabia that is aimed at promoting a positive reading culture in the region. Her writings can be found at www.hudamerchant.blogspot.com. She recently gave her first TEDx talk in Pune.

Ushnav Shroff is a fiction writer, book-reviewer and a journalism graduate. His work has appeared in several national and international magazines, anthologies and newspapers such as Phenomenal Literature, The Hindu, Reading Hour and Free Press Journal, among others. He currently curates literary events for a premier cultural centre in Pune.

Tales of Enchantment by Sanujit Ghose
Reviews of "The Bombay Review: International Anthology of Short Fiction & Poetry 2016 (Paperback)"
No Reviews Yet! Write the first one!
Please register or login to write a review.