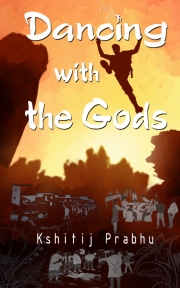 Dancing with the Gods

All his life, Krishna has looked up to his friend Leyton. Leyton’s smart and brave, and always knows the right thing to do. Krishna is an atheist who is motivated more by material considerations rather than creative ones; on the other hand, Leyton gives in to his passions and lives life on his own terms, and always emerges stronger and more creative. Until now…

A strange beast stalks the country. It’s brash, it’s aggressive, and mocks at the laws of humanity. It is the beast of inhumane politics. Krishna is a part of the ‘community', that is separated from the politics and policies that govern the rest of the nation.

Krishna knows he’ll have to make a choice. But how can he choose – when it means fighting his father, his family on one side, and fighting his best friend on the other.
Will Leyton survive his struggle against the system, or will he be forced to come to terms with it?

Kshitij Prabhu is an avid blogger and a poet. An Engineer, his articles have appeared in many newspapers, basically obsessed on politics and social welfare. He has a passion for helping people and is currently compiling a book containing his personal poetry. On a typical 'free' day, you might find him taking classes for under-privileged children in nearby slums, taking photographs at the city lake or reading books. His latest project, a compilation of soul-touching poetry is scheduled to be published later this year.

My Short Stories and Philosophical Essays by Suresh Kumar Tamada

Pen's Down (On Love) by Priyanka Agrawal

Never Fall In Love Like This by Osheen Agrawal

The book starts with the narrator recounting a well described humorous tale of his first meeting with Leyton.
Then the story jumps to the college years with the incidents of shared cups of tea and booze, long smiley filled chats on facebook, all of which surely strike the right chords with the readers and make up the first half.
The second half of the story is a complete contrast and, turns out to be a hard-hitting tale of a social activist who takes on some monarchical methods to achieve his goal.
I don’t know why the writer has tried to convey as much as he can in only 115 odd pages. If he did this for the sake of young readers who have a very short attention span, then he has succeeded in his goal, but personally speaking, I would have wanted another 100 pages added to the story.
Laudable Points about the book:-
1. Amazing climax.
2. Chapters are short and to the point. I’d recommend googling the chapter names before reading. It will surely help in discovering their depths.
3. Lots of humour in first half. For example: - A man is as stupid in love as he is dumb during his semester exams.
4. The lead character is identifiable and mysterious. The writer has been successful in keeping the mystery till the end.
Cons:-
1. As previously mentioned, I felt the story was a bit short.
2. Lack of strong females characters.
3. Some events could have been described more vividly.

Since the author is a first time writer, what makes the book special is that it has all the right ingredients of humour as well as the seriousness and maturity that many first time writers lack.
The bottom line: A well written book with an extremely strong beginning and a battle ridden journey, and a soul touching ending; characters are beautifully written except a few who could’ve been provided more space in the story.