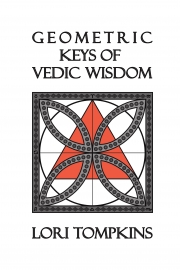 This book presents the author’s sometimes stranger-than-fiction adventure of recovering long-buried geometric and zodiacal keys which unlock and reveal the true context and sense of the Rig Veda, the lore of Vishnu’s avatars, St. John’s Revelation and many other ancient mysteries or mythologies. The recovery of these keys dismantles thousands of years of accumulated distortions, superstitions and religious dogmas that have arisen from world-wide ignorance of the occulted meaning and context of the Rig Veda. It simultaneously facilitates passage into our higher (or supramental) ranges of consciousness, wherein all of life is known as a divine singularity or Oneness unfolding itself in the unified field of Time and Space. The revelations herein descended in 2016 as a continuation of Sri Aurobindo’s yogic mission to uplift the “Secret of the Veda” along with the true origin and goal of Yoga and the Sanatana Dharma (Eternal Truth) of the Ancient Seers. This book is aimed towards readers interested in the evolution of consciousness, as well as sacred geometry, astrology, integral gnosis, symbology, the true origins of yoga, and the eternal truths (Sanatana Dharma) of India's Vedic Rishis or Seers in our day and Age of Aquarius. It may be of special interest to students of the Supramental and Integral Yoga of Sri Aurobindo the Mother and Patrizia Norelli-Bachelet (Thea), but one does not have to be familiar with these maha yogis to enjoy, understand, and benefit from the descent of Gnosis that is contained herein. Readers who enjoy Dan Brown books (especially "The Lost Symbol") should appreciate this entirely non-fictional account of the recovery of long-lost symbols and treasures of the Vedic Rishis, which help to solve or demystify many of our world’s greatest ancient mysteries, including the true significance of the release of the Seven Rivers in the Rig Veda and the parallel account of the release of the Seven Vials or Bowls of St. John's Revelation. At the least it exposes math (or geometry) as the core of our ancient mythology. In addition to discussing the Kali Yugas and Indian mythology in depth, other world mythologies touched upon include: legends of Thor the Thunder God, Pegasus, the Divine Physician, Dionysus (Bacchus), the Fountain of Youth, water nymphs, Medusa, King Arthur, Excalibur, the Holy Grail, the Water Bearer of Aquarius, the Aztec Sun Stone, the Philosopher's Stone, the Rock of Ages and accounts of Biblical heroes walking on water or holding waters (seas) apart, or extracting water from a rock to quench the masses, as well as the idea of the Virgins of Heaven who await God's faithful martyrs. The single Vedic origin and context of all these mythologies becomes fully apparent in this book. It also becomes apparent that the name and mythology of Niagara Falls is firmly connected to Vedic lore. See the Book Trailer for 'Geometric Keys of Vedic Wisdom': https://www.youtube.com/watch?v=LdUcYpUh-w0

LORI TOMPKINS received her BA in English Literature from the University of Virginia in 1991 and an MA in Education at the University of Colorado in 1994. Lori has been a student of Integral and Supramental Yoga since 1993, and she currently lives and teaches Hatha Yoga in California. Her favorite activities are mountain biking, hiking, dancing, being in or near water, and appreciating the Divine Oneness of creation.

The man who knew the answer by Austin S. Gill
Reviews of "Geometric Keys of Vedic Wisdom"
No Reviews Yet! Write the first one!
Please register or login to write a review.