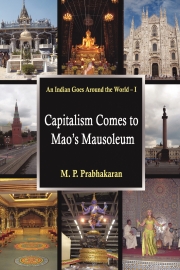 An Indian Goes Around the World - I: CAPITALISM COMES TO MAO'S MAUSOLEUM

"I travel, therefore I am – apologies to Descartes for twisting his noble thought." That’s how M. P. Prabhakaran describes his passion for travel.

If academic qualifications are a measure of one’s learning experience, he has a Ph.D. in Political Science from a prestigious American university. But he insists that he gained his greatest learning experience not from academic institutions, but from his frequent travels around the world. He shares that experience with readers through the pages of this book.

He introduces them to the geopolitical, historical and cultural landscapes of various countries stretching from Argentina to China. He narrates in fine English prose the scenic beauty of some of the places he visited and personal stories of the people he met. In the course of interacting with those people, he also projects among them the real image of India – the image of a country which, in spite of being multi-religious, multi-ethnic multilingual, and multicultural, has remained intact as one political entity and become one of the most vibrant democracies in the world. The book is a page-turner.

After spending four decades in journalism and teaching, M. P. Prabhakaran is now enjoying his retirement. "By retirement," he hastens to add, "I only mean that I stopped working for others." He has been busier than ever working for himself, doing things he always wanted to do: reading, writing and travelling.

He began his career in journalism in 1969 as a cub reporter on Current, a weekly newspaper (now defunct) published from Bombay (now Mumbai). He then moved on, as a copy editor, to March of the Nation, another Bombay-based English weekly (which is also defunct now), and then to Free Press Journal, one of India's leading English dailies.

After immigrating to the U.S. in 1975, Prabhakaran worked as editor of The Voice of India, a monthly, and of South Asia Newsspecial, a news and feature syndicate. Since 2001, he has been travelling extensively and posting his travel experience on The East-West Inquirer, an online monthly he started that year. The monthly, published at www.eastwestinquirer.com, also carries his social and political commentaries.

The Twelve Evils in the World by Rodolfo Martin Vitangcol

Kashmiriyat at cross roads; by P.Parimoo

A vast collection of stories from different countries. Gives a vivid description of most of the places that the author visited. Must read for people who loves to travel. It tells you what to visit and its importance