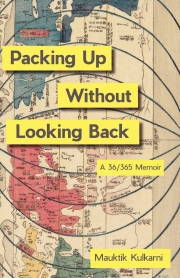 Packing Up Without Looking Back

After finishing his solo trip in South America, Mauktik returned to the United States with no intentions of traveling solo again. In a mere four years, he got itchy feet again and decided to backpack around the world for one year. Starting from the Middle East, he covered 36 countries in Europe, Africa, Asia, Oceania, and South America. He still finds it hard to believe that he survived a technical glitch in a Norwegian flight at cruising altitude, debauchery in Barcelona, demoralizing sights of a Palestinian refugee camp, intense interrogation at the Israeli border, depressing history lessons in Germany and Poland, 50 degrees Celsius temperatures in the Moroccan desert, bout of diarrhoea while climbing Kilimanjaro, shark cage diving in South Africa, the stiff language barrier in China, eating strange food in South East Asia, scuba diving in the Great Barrier Reef, madness of the Carnival in Rio, walking on the Perito Moreno glacier in Argentina, and the suffocating heat, humidity, and mosquitoes of the Amazon jungle. This is your front row seat to wanderlust on steroids; a kind of journey that takes you around the world and helps you connect with yourself.

Mauktik Kulkarni is an electronics engineer-turned-neuroscientist based in Mumbai, India. An entrepreneur at heart, he was a part of some successful start-ups before he began exploring his creative side. He is an author, film maker, public speaker, and traveler, who has backpacked through more than 50 countries. His first book, A Ghost of Che, a memoir based on his solo, 8000km motorcycle trip in South America, was published in 2009. It was followed by a whirlwind, round-the-world trip to 36 countries in one year. Riding on a Sunbeam, his first film as an executive producer and the male protagonist, was released in 2016, and is a backpacking film which explores the social, cultural, economic and religious contradictions of modern-day India. These days, he is co-producing the feature film adaptation of A Ghost of Che. He has delivered invited lectures on neuroscience, entrepreneurship, traveling, film-making, and anything else that strikes his fancy. He has also been a guest columnist for travel and sports magazines and is constantly looking for new adventures in life.

113 World Landmarks To See Before You Die by Herbert Howard

The Shades of you: Ladakh by Kaustubh Shridhar Limaye

Colors of Sand !!! by Roopa

Egypt - Going back in Time by Dipanshu Aggarwal
Reviews of "Packing Up Without Looking Back"
No Reviews Yet! Write the first one!
Please register or login to write a review.