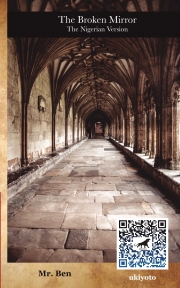 An account documented by Raheem, friends with Joke, who was a twin sister to Shade and whose diary birth the story title, the divorce that eventually ended the marriage between Bode and Cynthia, parents to Shade and Joke , was mirrored in the lives of their two daughters who did not leave to enjoy their relationships. The state of Bode’s anomaly triggered great disarray in his family as incessant quarrels and fighting became the order of the day. Joke was raised by Cynthia in Calabar hating her father and twin sister. In time, she would cause a wiping out of a generation but not live to tell the story!

Mr. Ben, as he is fondly called, has a mandate of serving humanity through the creative use of writing. Encouraged by his labor for knowledge through the years, he has unequivocally brought to the hearing of people and organisations values that would be instrumental to their positive change. To depict this feat, Mr. Ben has written over twenty works-fiction and non-fiction. He has under his belt written works that fall under the categories-juvenile, SCI-FI, short stories, family, inspirational, scientific, educational/academic, business, sexuality/relationship, self-help, religion and many more.

Sit Down Time by Gil Hardwick

The Alpha and The Omega and Other Stories by U.A.Kiran
Reviews of "The Broken Mirror"
No Reviews Yet! Write the first one!
Please register or login to write a review.