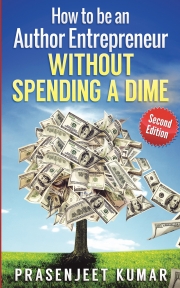 How to be an Author Entrepreneur WITHOUT SPENDING A DIME

Are You Making The Same Costly Mistakes That Authors Usually Make?

Then here is a book that helps realise your author-entrepreneur dreams Without Spending a Dime.

From the author of 32 books and sixty translations selling over 50 countries, here comes a DIY manual of practical tips and advice that can take your writing dreams to literally publishing Nirvana.

Distilling his practical, hands-on experience, author Prasenjeet Kumar advises all newbie authors to be wary of all schemes, plans, clubs, and memberships which have perfected the art of fleecing desperate authors.

Instead, he explains how you can, by taking advantage of the vast knowledge already available in public domain, including the author’s own website www.publishwithprasen.com, teach yourself everything that you need for putting out your book in the market, in both paperback and e-Book formats.

There are tips on how to organise, write, edit, proofread, cover design, format, price, publish, and market your books.

All, as promised, Without Spending a Dime!

Prasenjeet Kumar is the author/co-author of over 32 books in four genres: Fiction, motivational books for introverts (the Quiet Phoenix series), books on Self-Publishing (Self-Publishing WITHOUT SPENDING A DIME series) and cookbooks (Cooking In A Jiffy series). His books (60 titles so far) have been translated into French, German, Italian, Japanese, Spanish, and Portuguese, and sell in over 50 countries.

Prasenjeet is a Law graduate from the University College London (2005-2008), London University and a Philosophy Honours graduate from St. Stephen's College (2002-2005), Delhi University. In addition, he holds a Legal Practice Course (LPC) Diploma from College of Law, Bloomsbury, London, and was for a brief while, a solicitor of England and Wales.

Prasenjeet is the self-taught designer, writer, editor, and proud owner of the website www.cookinginajiffy.com which he has dedicated to his mother. He also runs another website www.publishwithprasen.com where he shares tips about writing and self-publishing.

A Guide to Japanese Grammar by Mr Tae K Kim

A Shortcut Through The Bible by Prof. Dr. Christopher Thomas
Reviews of "How to be an Author Entrepreneur WITHOUT SPENDING A DIME"
No Reviews Yet! Write the first one!
Please register or login to write a review.