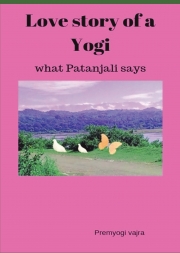 Love story of a Yogi

It is a true tantric story of a Love Yogi named Premyogi vajra, in his own words or in the name of Love Yogi. Around 25 years ago, there existed a teen named Premyogi vajra, in the deep Himalaya. His grandfather, the same tantric-spiritual old man was a renowned priest in the nearby localities. Boy with some spiritual capabilities since his childhood was studying science in English medium. That was very tough for him for he had come from a Hindi medium school and so on. He had glimpse enlightenment in sleep around quarter of a century ago. Further he got his Kundalini awakened at the end of the following progressive discussion in original (partially edited; This has been done only to preserve the original essence, thus the subtle power of the real time discussion somewhat preserved) at brilliano kundalini online forum, which ran throughout the years 2016-18 (26-10-2016 to 08-05-2018) for roughly one and half year. Therefore, this discussion may have subtle power hidden inside it. Paragraphs have been written downward in order of subsequent dates or times. Each paragraph denotes writing on a single sitting. Discussion from other participants have been omitted out to avoid confusion. This book is not less than a boon for kundalini-seekers and Yoga-enthusiasts. It demystifies and clarifies the Patanjali-yogsutras in one of the best ways. This book is full of real-time practical points, which were experienced by Premyogi vajra during his meditation. There is nothing as mere theoretical in this book. We hope that readers will highly enjoy this book.

Premyogi vajra is born in 1975 at a small village of Himachal pradesh, India. He is naturally fond of writing, philosophy, spirituality, yoga, behavioural science and tourism. He has also worked in the field of animal husbandry. He is also fond of Poyhouse farming, scientific and water saving irrigation, kitchen gardening, cow rearing, vermicomposting, music and singing. He was once a vedic priest for a short time, performing religious rituals in people's homes. He has got some advanced spiritual experiences(enlightenment and kundalini awakening). His autobiography including his unique experiences have especially been reflected in this book, Shareervigyaan darshan-Ek Aadhunik Kundalini Tantra(ek yogi ki premkatha) in Hindi. His helper/coauthor has also been named as "Quora Top Writer 2018".

Do Not take This World Seriously! Vol 2 by Kishor Kulkarni
Reviews of "Love story of a Yogi"
No Reviews Yet! Write the first one!
Please register or login to write a review.