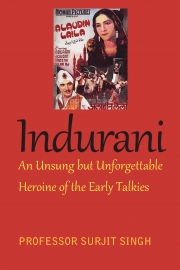 Indurani: An Unsung But Unforgettable Heroine Of The Early Talkies

Indurani (Ishrat Jehan Siddiqui) (1922-2012) was a star of stunt and social pictures in the thirties. She was the heroine of 20 films from 1935 to 1942. Her heroes were Jayant, Prem Adib and E Billimoria. She co-starred with Sardar Akhtar, Leela Chitnis and Ratanbai. Famous actress Azra's mother Sarojini was her elder sister, who was also an actress.
After describing how actresses entered films and how the studio system worked, the author details the life of this Daryaganj Delhi teenager before, during and after films using interviews with her family members and old magazines like filmindia and film booklets.
The book contains more than 80 rare and never before seen illustrations, including posters of films, photos from booklets and photos of her family.
The Foreword to the book was written by Shree Prakash Magdum, Director, National Film Archive of India, Pune.

Professor Surjit Singh, a diehard movie fanatic, period. He is a retired Theoretical Physicist. He has been watching Hindi movies since 1952, has been collecting Hindi songs, movies and magazines since 1969, and has been writing about these things since 1996. He has had a website since 1999, http://hindi-movies-songs.com/joomla/

He plans to publish many books on Hindi films and related material, mainly from the thirties and the forties. He has published the following books:

Edwina: An Unsung Bollywood Dancer of the Golden Era (2015)

The RMIM Minibus (1992- ): A Compendium of Selected Writings About Indian Films, Their Songs and Other Musical Topics From a Pioneering Internet Discussion Group (2017)

Music and Arts in Hyderabad Deccan: A Contribution to the History and Culture of Bygone Days (Edited only) (2017)

Edwina: An Unsung Bollywood Dancer of the Golden Era by Professor Surjit Singh

Beete Hue Din (Forgotten Memories of Hindi Cinema) by Shishir Krishna Sharma
Reviews of "Indurani: An Unsung But Unforgettable Heroine Of The Early Talkies"
No Reviews Yet! Write the first one!
Please register or login to write a review.