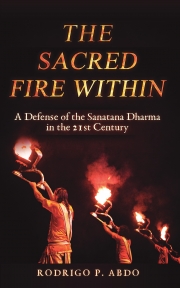 The Sacred Fire Within

A Defense of the Sanatana Dharma in the 21st Century

This book is a bold apologetic work on Hinduism and in a broader sense, of Sanatana Dharma, directed to all Hindus who feel that their religion is in danger nowadays. This book is rooted in the archaic origins of Hinduism in the Rig Veda but at the same time looks at the future blending dharmic ideas as “Purva Paksha” and ancient Hindu disciplines with Western philosophy, including the philosophy of Heidegger, Hegel, Nietzsche and the theories of the psychoanalysts Carl Gustav Jung and Jordan Peterson. Besides showing the readers simple ways to defend Hinduism in today's challenges, it shows more complex and fascinating theories to protect Sanatana Dharma like the theory of monumental history by Nietsche, something which was never thought before. However, this work doesn't neglect the traditional Hindu practices and the importance of it in the 21St Century. This book is a must-have for every religious Hindu who feels the need to defend his/her religion in an unprecedented way.

Rodrigo P. Abdo is a Hindu Brazilian author who graduated in International Relations who has a vast experience in spiritual and religious matters. He is a self-taught philosopher and scholar in Eastern religion and Western religion who has become worried about the present situation of Hinduism in his beloved India and decided to write a book to protect Sanatana Dharma. "The Sacred Fire Within" is his first book.

Decrypting the Date of MAHABHARAT WAR by Thamarai Selvan

Philosophy of Creation and Life by Dr.Abraham Chettissery
Reviews of "The Sacred Fire Within"
No Reviews Yet! Write the first one!
Please register or login to write a review.