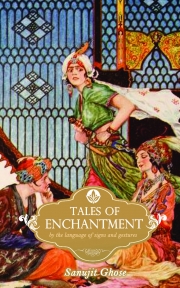 by the language of signs and gesture

Baron Silvestre de Sacy like Prof. Galland, felt that the Thousand Nights was first composed in Syria and written in a plain dialect for the poor people. Many European authors while trying to translate the tales had lamented that they failed to find a copy of the original or an authentic manuscript. They possibly never heard of the superstition that no one could read through such a book without dying - the superstition going back to the fourteenth and fifteenth centuries AD. The other practical side was that there was no author of those stories putting down all of them together in a book. The scholars well versed with Arabia stated that the stories were strung together by men who commanded themselves to the kings and emperors by telling them only from memory.
All such tales were brought by Crusaders, by Mongol missionaries, by Gypsies, by Jews, by traders, by travellers.
In Eastern countries the often inflated code of hospitality, coupled with the exclusion of women and later gatherings of men in the cool of the evenings, had given great impetus to story-telling. Indeed, it had produced the Rawi, or professional story-teller - an important member of the community unknown in cooler latitudes, where the story-telling was almost entirely confined to the family circle. There was the warning against lust, improper aspirations, gullibility, and superstition. It showed women to be passive pawns in the games that men played.
Another lively text full of wordplay Dasakumaracharita showed incidents, matching up with those of the Arabian Nights. They gave a lively picture of wily deception, undue naivety and superstition, and disregard of human life.
On this setting the tales of enchantment were about to begin. They had been taken from the Arabic, Persian and Sanskrit texts and put in a language as close to the original style of narration as possible. The tales had the unique style of the language of signs, now and then mixed with a magic thread to stun the lovesick man.

Sanujit Ghose, born in July 1940, joined IAS in 1964 and had a long career. Since childhood he was an eager listener to the unending stream of fables and stories from his great grandmother.
His first posting was in 1967 at a tribal area in Odisha. By chance, he could buy 16 volumes of The Book of the Thousand and One Nights privately published by Burton Club, London in 1888. During the five years to go through them, the fascinating tales revealed that a thousand years ago the great cities of Baghdad, Damascus, and Cairo raced ahead of the Western world. Arab caliphate was a dynamic superpower – beacon of learning, tolerance and trade.
He obtained The Ocean of Story - Somadeva's Katha Sarit Sagara in ten volumes edited by N. M. Penzer. Next was Gutenberg EBook The Adventures of Ten Princes by P. W. Jacob of the Dasakumaracharitam.
In 1924 Sir Richard Temple in the introduction to Katha Sarit Sagara held that India was indeed the home of story-telling. From there the Persians learned the art, and passed it on to the Arabians. The tales found their way to Constantinople and Venice and finally in the pages of Boccaccio, Chaucer and La Fontaine. Penzer pointed out in his notes, the Indian ideas about the vetala closely resembled those of the Slavs about the vampire.
Tales of Enchantment were an anthology of such a variety of tales possibly for the first time for the eager reader to go through at leisure.

तनिष्का by surendrapal
Reviews of "Tales of Enchantment"
No Reviews Yet! Write the first one!
Please register or login to write a review.