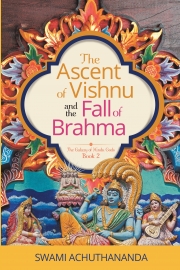 The Ascent of Vishnu and the Fall of Brahma

The Galaxy of Hindu Gods - Book 2

With a population of over a billion people, India is the largest democratic country in the world. India is also home to a million gods and worships them all-- according to Mark Twain. In this book, we take a look at two of the most powerful gods of Hinduism--Vishnu and Brahma. As a creator god, Brahma holds a prominent position in the Hindu pantheon even though he lost his popularity--we'll learn why. When Brahma's popularity fell, Vishnu rose in power. Today, Vishnu is an important god, and has a following of more than 700 million devotees, occasionally identified by vertical marks on their foreheads.
How did it all began? In this book on Vishnu and Brahma -- the two super gods of Hinduism -- we begin by examining a popular creation myth in which Brahma emerges from the navel of a sleeping Vishnu and starts crafting the world. Further on, we explore the churning of the milky ocean, a crucial event in Hindu mythology and one of the rare occasions when gods and demons collaborated in search the nectar of immortality. Many precious things--and surprises--came out this quest, including Lakshmi, the goddess of wealth and consort of Vishnu.
We also get to know a critical aspect of our ancestry. According to Hinduism, we are all descendants of Manu, who is referred to as the father of human race. While this book is predominantly about Brahma and Vishnu, there will be occasional detours when we pause to look at art and architecture. In particular, we'll look at Angkor Wat, one of the largest Hindu temples in the world. Guess what? Angkor Wat is a Vishnu temple located outside India, much to the dismay of millions of Hindus. We'll also peek at ancient paintings from a mythological perspective, especially the unique genre of miniature paintings called ragamala that combines art, music, and poetry. A remarkable shift in worship took place during this period. Bhakti became a major form of worship and pervaded Hindu society forever. Nothing exemplifies bhakti more than the dancing-and-chanting Hare Krishnas.

Having lived more than two decades in India, Swami Achuthananda lives and breathes the culture. He is an exponent of Indian Carnatic music and researches Hindu mythology in his spare time. A born Hindu, Swami loves India passionately but lives outside the country, devours fries and burgers as much as curry and spices.
When Swami is not discussing Indian mythology, he's seen talking about India's other greatest religion - cricket.

The Chariot of God: ‘Dharma Rath’ by Ajai Kumar Chhawchharia

Gita Bhaav Prasad (Hardbound) by Dr. Vimal Chandra Jain
Reviews of "The Ascent of Vishnu and the Fall of Brahma"
No Reviews Yet! Write the first one!
Please register or login to write a review.